When was the roman colosseum built? History and curiosities

The Colosseum is the most famous monument in Rome and a must-see. Its history fascinates and intrigues tourists from all over the world.

→ If you want to discover the beauty and glory of ancient Rome, you can book our guided tour of the Colosseum and the Imperial Forums.

In our article you will discover when the Roman Coliseum was built, its history, functions and some curiosities.

History of the Roman Colosseum

The Colosseum of Rome (also known as the Flavian Amphitheatre) is the largest Roman amphitheatre in the world and the most impressive monument in the history of ancient Rome.

When was the Roman Colosseum built?

The construction of the Colosseum in Rome is due to the emperor Vespasian in 70 -72 A.D. (during the Flavian dynasty) and was completed by his son Titus in 80 A.D.

The construction work was financed with the proceeds of provincial taxes and the loot of the Temple of Jerusalem.
In 1813 a block of marble with a dedicatory inscription was found:

It was chosen as an area a valley between the Velia, the Oppio and the Celio, where there was an artificial lake excavated by Nero for his Domus Aurea, his residence.
The aqueduct was diverted for civil use, the lake was bonfied and the foundations were laid there.

The amphitheatre ceased to perform its original function in the sixth century AD.
Over the centuries its arches housed artisans, workshops, hospitals, brotherhoods and even a cemetery.
The popes instead used it as a marble and travertine quarry to build Palazzo Barberini, the Capitol, Palazzo Venezia and San Pietro.

→ At stop 3 of our panoramic tour of Rome "Hop on Hop Off" you will find the Colosseum and you can also visit the archaeological area, the Roman Forum, the Palatine and the Arch of Constantine.

Curiosities about the Colosseum 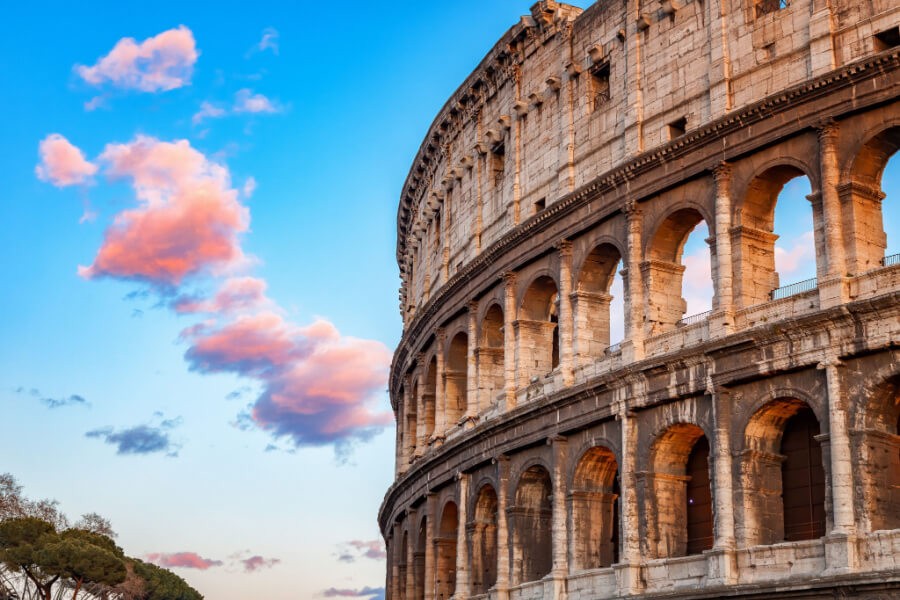 Here are some answers to the most common curiosities about the Colosseum in Rome:

In addition to curiosity, there are also legends related to the great Roman amphitheater. According to some myths of the Middle Ages it seems that the Colosseum represents the entrance to hell where, at sunset, the souls of the dead wander in search of eternal peace.
Another curious legend says that the Coliseum was a kind of diabolical temple in which sorcerers addressed the following question to the followers: "Colis Eum?" which means "Adore Him?" in reference to the devil. Hence the name Coliseum

Moreover, many people wonder what were the countless holes that dot the structure of the Colosseum. According to popular tradition these were the attempt of the barbarians to destroy the amphitheater. When the invaders conquered the city, they made holes in the wall and filled them with gunpowder in order to blow up the famous monument. An unnecessary effort, because the foundations held and the Colosseum remained standing. Hence the Roman saying: "As long as the Colosseum lasts, so will Rome!"