Try Roman Street Food is the best way to get in touch with Rome and Roman culture. With lifestyle changes, street food has become increasingly popular around the world. In this article we will give you a list of the various Roman street food with all their original snacks and street food 100% Roman doc!

The street food in Rome tells the essence of the culinary tradition of the place. Let’s see together what are the favorite snacks of the Romans and places not to be missed to eat them! From pizza to cut to trapizzino, we immediately start the ranking and discover our guide to the best Roman street food to try absolutely during your tour of the Capital.

Our guide to the best Roman street food

Whether it is in one of the bars scattered around the streets of Rome, at the market or in a kiosk, it is impossible not to stop to taste the tasty dishes of the Roman tradition. Here is our guide to the best Roman street food (sweet and savory) to try at least once during your trip to Rome: 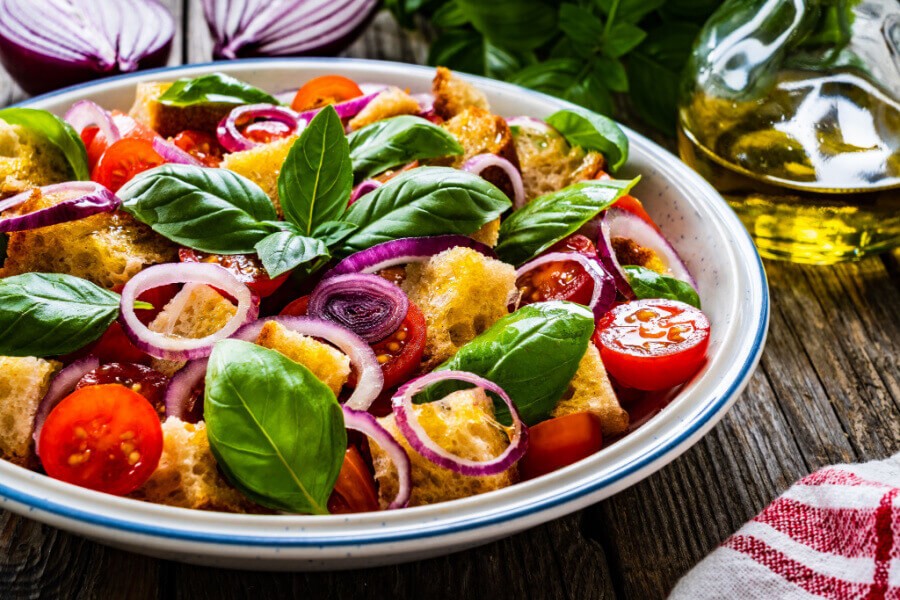 A simple and poor dish that has become a traditional dish of the Roman tradition that from ancient times provided for the use of "untouched" bread, that is "old", moist and seasoned with oil, tomatoes, basil and pepper.

Famous to the point of being a source of inspiration for poets and actors, to whom they dedicated verses and rhymes, such as Alberto Sordi and Aldo Fabrizi, and today one of the inevitable street food of the Roman summers. 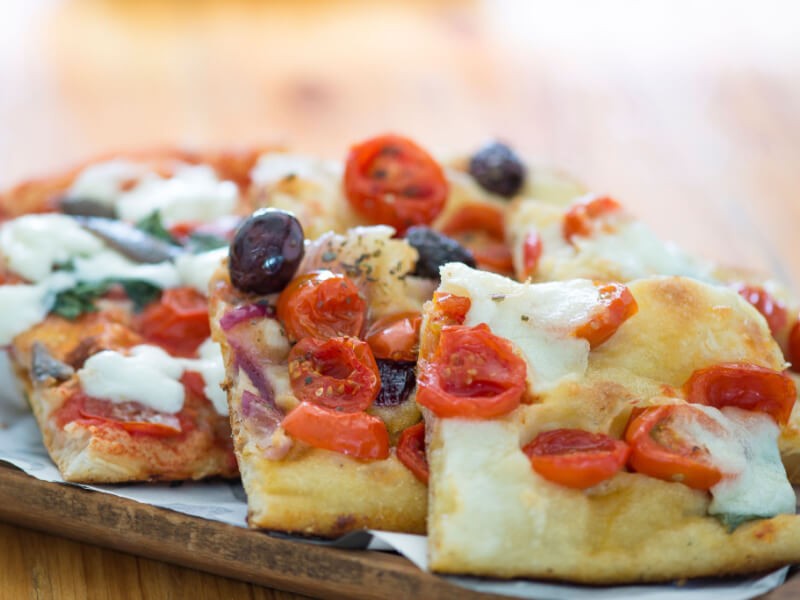 The Roman pizza, scrocchiarella outside and soft inside, is proposed in slices with various condiments and heated in an electric oven. From the classic version to the tomato until you get to the most elaborate pizzas.

It is one of the street food spread all over the world, which can be consumed outside the restaurant or in a nearby square. 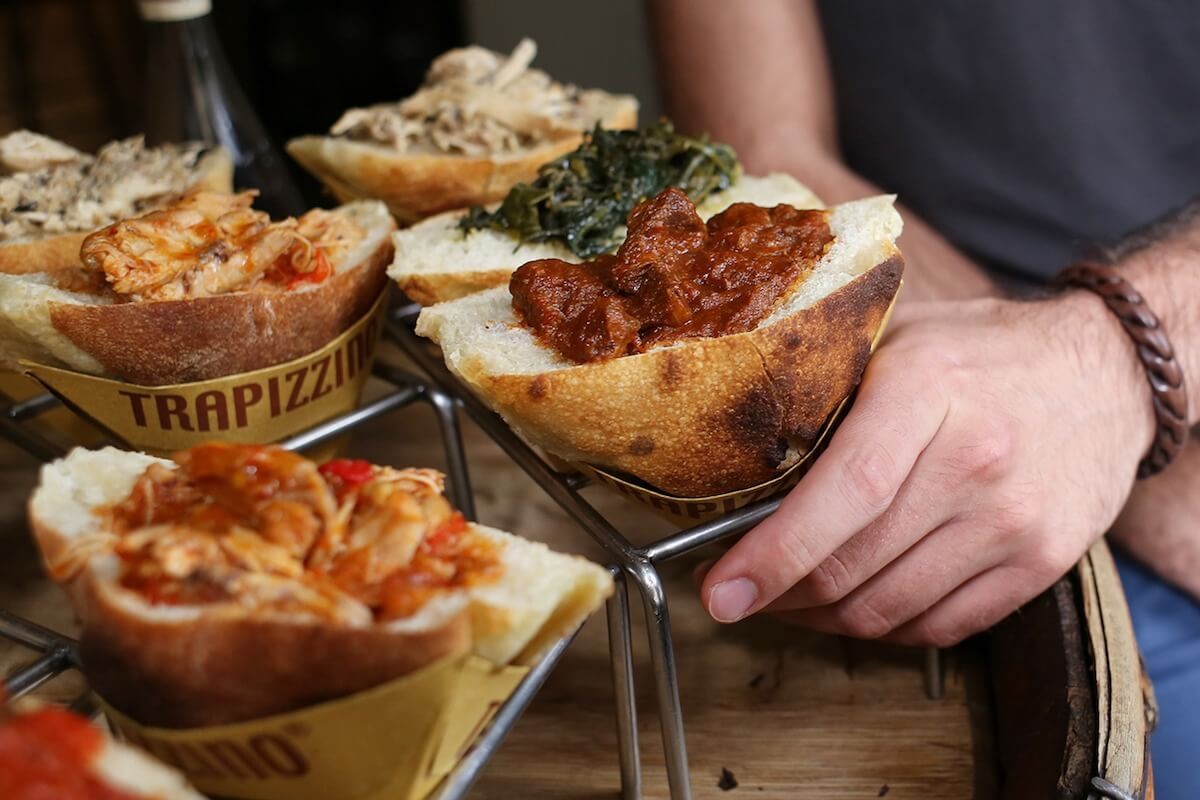 Trapizzino is a sandwich-shaped pizza created in 2008 by pizza maker Stefano Callegari. It was born in the famous Roman district of Testaccio and its success has led it to spread to other areas of Rome and Italy, up to New York.

It is one of the last street food born that has become part of the food to try absolutely in Rome. It is a triangle-shaped pizza pocket, filled with traditional sauces such as eggplant parmesan, meatballs with sauce, tripe and much more. 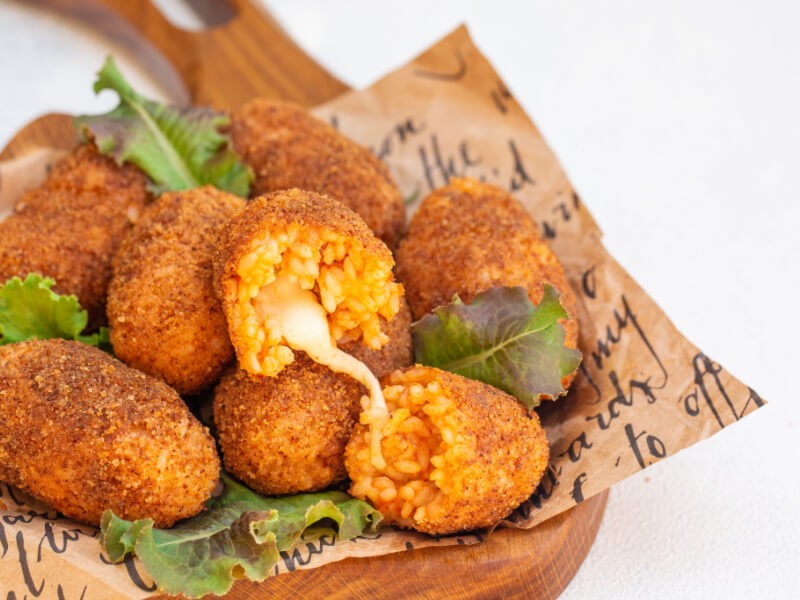 Supplì is a Roman street food that dates back to 1800. Be careful not to confuse it with the classic Sicilian arancino. The supplì is a ball of fried tomato rice, filled with mozzarella but also served in other versions, including the classic Roman supplì amatriciana or carbonara.

The name comes from the French "surprise" referring to the surprise that you have when you discover inside the ball of rice hot and stringy mozzarella.

→ Are you planning a trip to Rome? Maybe you might be interested in: "3 days in Rome: what to do and see" 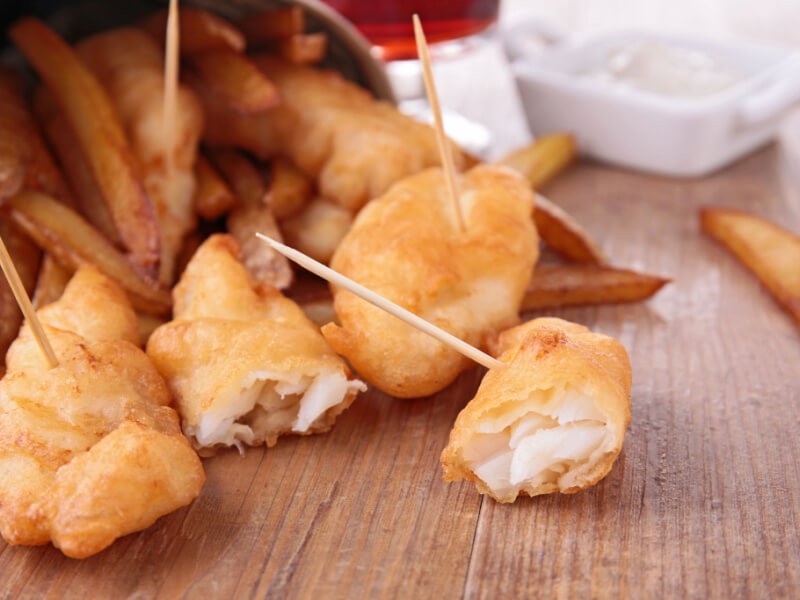 In addition to supplì, a very common fried snack in Rome is fried cod fillet. The fillet of cod is one of the oldest street food, the result of the encounter between the Jewish and Roman traditions.

The cod fillet is dipped in the egg, battered and fried in boiling oil. Once ready, it is served in a paper cone, ready for removal. 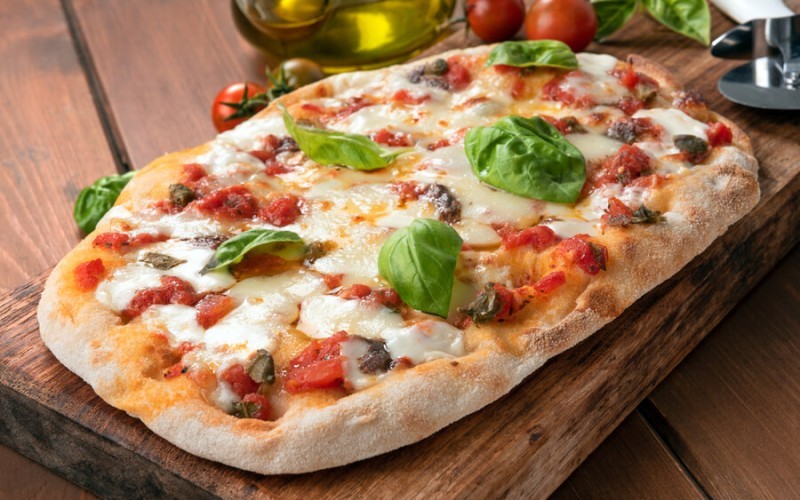 The pinsa romana is an oval shaped pizza, crisp on the outside and soft on the inside made by the pizza maker Corrado di Marco.

Its characteristic is the long rise that goes from 24 to 72 hours and a particular mix of flour ( rice flour, wheat, soy and sourdough). An explosion of taste to be enjoyed even quietly sitting on a bench.

Sandwich with the pork 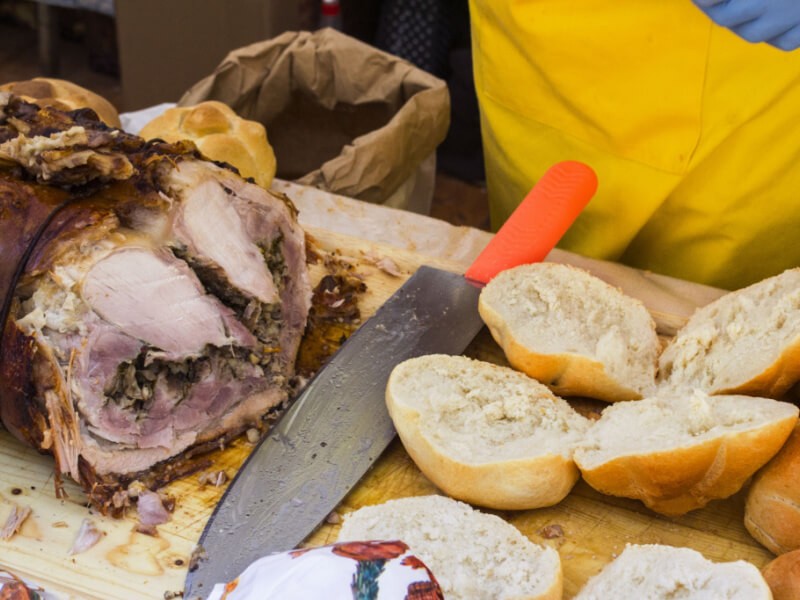 The freshly cut pork eaten hot inside a sandwich is something really sublime. And it is the absolute queen of Roman street food. Porchetta is a typical product of the Castelli Romani based on flavored pork cooked from two to five hours in a wood oven. 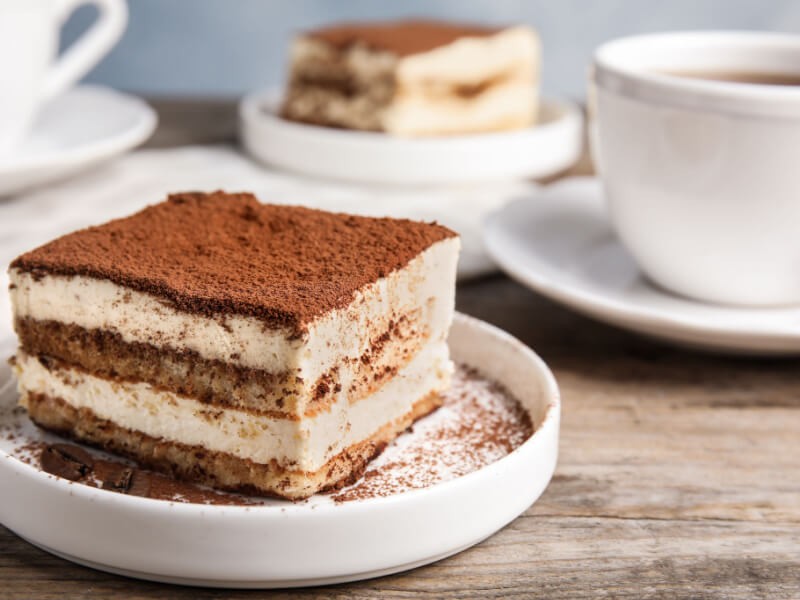 Tiramisu is the Italian dessert par excellence and one of the most popular desserts in Rome. The ingredients are simple: eggs, sugar and mascarpone. There are many places in Rome where you can eat an excellent tiramisu to take away, in the traditional version or in its variants, composed or broken down, soft or crunchy, in short, there is something for all tastes.

BOOK OUR EATALY TOUR DESTINATION, DISCOVERING THE ARTISTIC AND CULINARY BEAUTY OF ROME 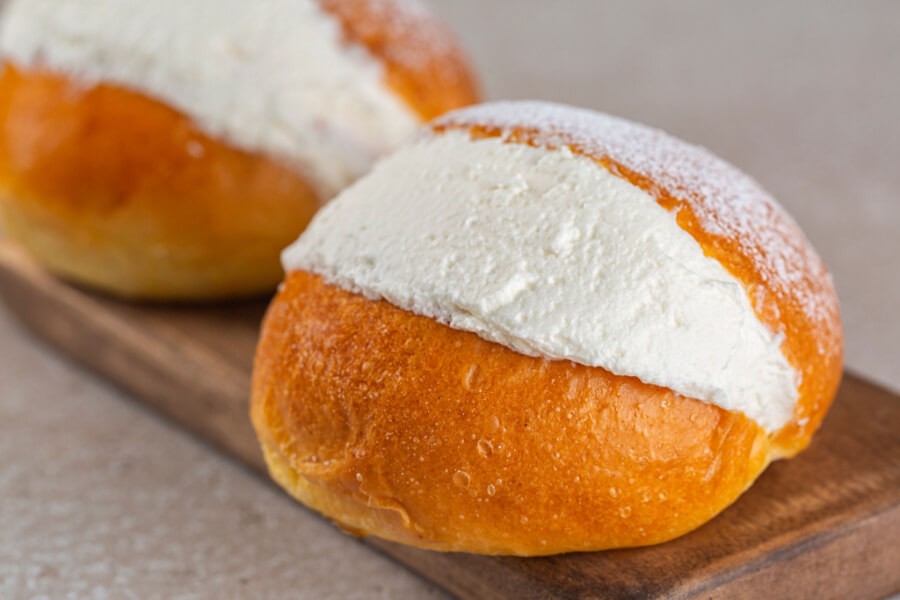 The Maritozzo is a typical Roman dessert whose original variant was the Lenten one with raisins, pine nuts and candied fruit. In fact, it is a dessert that was granted as the only sin of gluttony during the fasting period of Lent.
The variant currently best known in Rome is the maritozzo with whipped cream.

The maritozzo is a soft loaf filled with whipped cream, chocolate, pistachio etc.. However, recently, it is also served in the salty version, such as cheese and pepper and octopus with escarole. 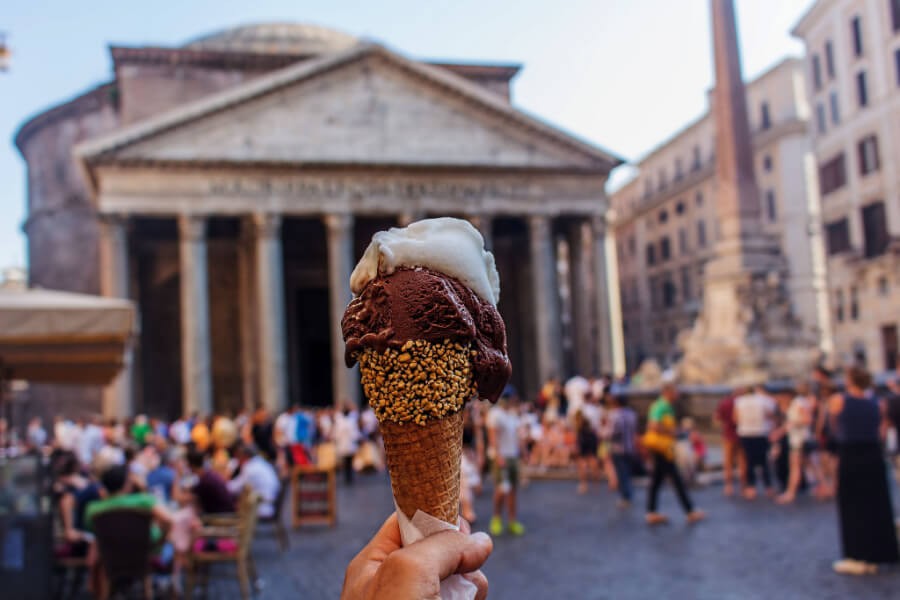 Even if it is not really a street food, ice cream is still a food eaten on the street with the use of the hands. With the arrival of spring, the desire to eat a fresh and good ice cream increases. Chocolate or fruit, in cone or in tray, ice cream is loved by adults and children.

After or before a nice walk there is nothing better than stopping to enjoy a good ice cream and enjoy a few moments of relax.