A guide to the best Roman monuments

Rome is a wonderful city and its timeless beauties are known all over the world. But what are the most important Roman monuments? Here is our personal list.

The city of Rome can be considered as an open-air museum, everywhere you look you can admire symbols and testimonies of the Roman Empire and countless masterpieces of architectural engineering.   Here are the 5 most important Roman monuments: 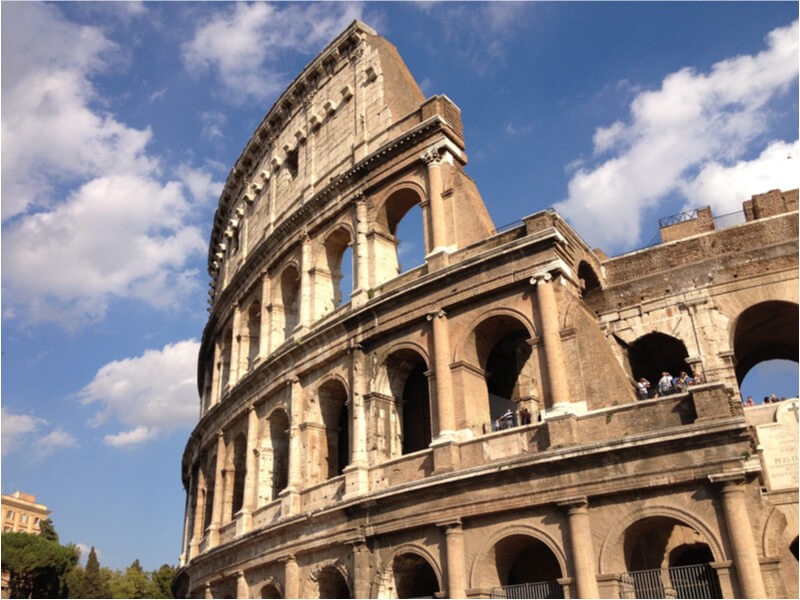 The Colosseum, also known as "Anphitheatrum Flavlum", was built in the year 72 after Christ, by Emperor Titus Flavius Vespasian, and is undoubtedly the most impressive and famous monument of ancient Rome.

The Colosseum was the oldest amphitheater in Rome, with a circumference of 527 meters and could accommodate more than 50,000 people to attend the shows held inside it: fighting, games, animal performances and naval battles.
The interior of the Colosseum was composed in the center of a grand central arena where the shows were held, while all around it was divided into steps covered with marble and intended for spectators. In the basement of the Colosseum, the Romans had built corridors and spaces intended to house the wild beasts and, as in the great theatrical performances, they manoeuvred devices necessary for the success of the shows.

In 2007 the Colosseum was chosen as one of the 7 wonders of the world. Nowadays it is the biggest tourist attraction of the Eternal City together with the Vatican. 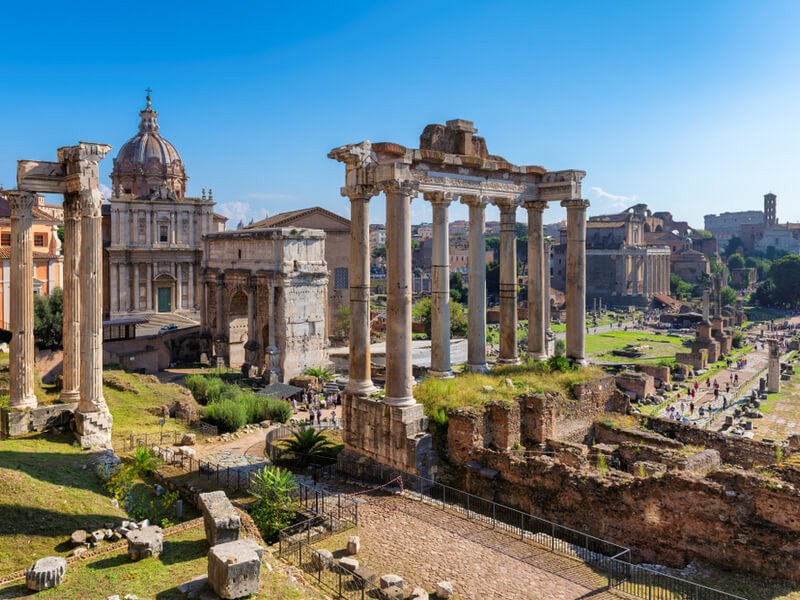 The Roman Forum is, together with the Colosseum, a symbol of the capital!

During the Roman Empire it represented for centuries the political and religious center of ancient Rome. Originally, the area occupied by Foro was a marshy area, later drained by the Cloaca Massima. With the fall of the Roman Empire the area went through a period of decline and looting, until being used as a pasture for cattle. In 700 the process of recovery began, bringing to light the remains, to become one of the most visited archaeological sites in the world.

--> Discover with us what to see with a visit to the Fori Imperiali along the Via Sacra, the main street of ancient Rome among temples, arches and ancient Roman remains. 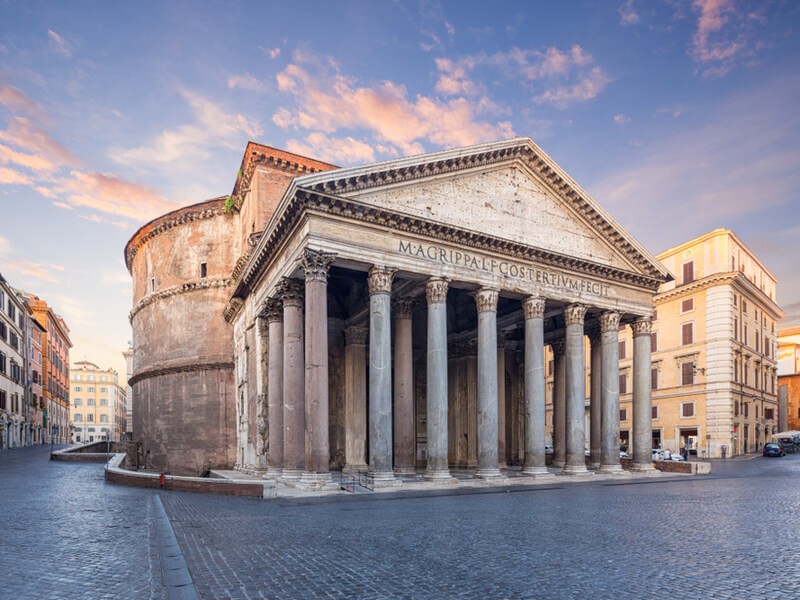 The Pantheon of Agrippa is one of the unmissable monuments of the Eternal City. It was founded in 27 B.C. by Marcus Vipsiano Agrippa and represents the highest expression of the glory of Rome.

It was built as a temple dedicated to all the gods of the past, present, and future. Later it was converted into a Basilica with the name Basilica of Santa Maria and Martyres.

The dome of the Pantheon was and still is the largest concrete dome in the world. On its summit there is a hole, the oculus, from which light and heat penetrates. If you want to deepen the topic, do not miss our article on the history and curiosities of the Pantheon of Agrippa. 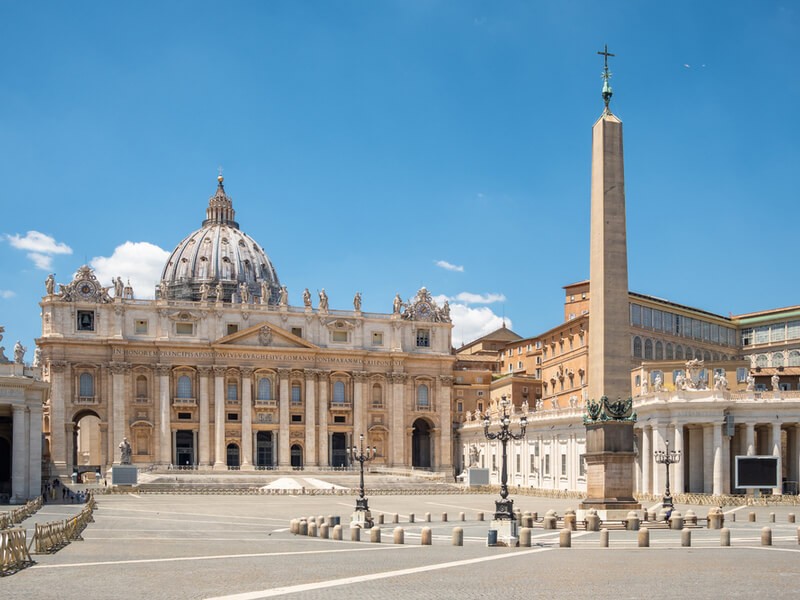 The heart of the Vatican City is St Peter’s Basilica, still today one of the largest churches in the world.

According to tradition, the primitive Basilica of Saint Peter, was erected around 320 AD by the Emperor Constantine in the place where the Apostle Peter was buried.  They committed about two hundred years, many artists, and several pontificates to achieve the complete remaking of the current basilica. This is surrounded by a splendid colonnade of 284 Doric columns and 88 travertine pillars of Tivoli, which would seem at a glance to want to symbolically embrace the faithful who gather here every day from all over the world.

The Basilica represents the temple of the Catholic Church and the place where the Pope celebrates the most important liturgies such as the Angelus, the Sunday Mass and the Easter Mass. One of the most spectacular elements of the Basilica is its dome, designed by Michelangelo and among its masterpieces inside you can admire the "Pietà", a sculptural work of great technique and emotion. 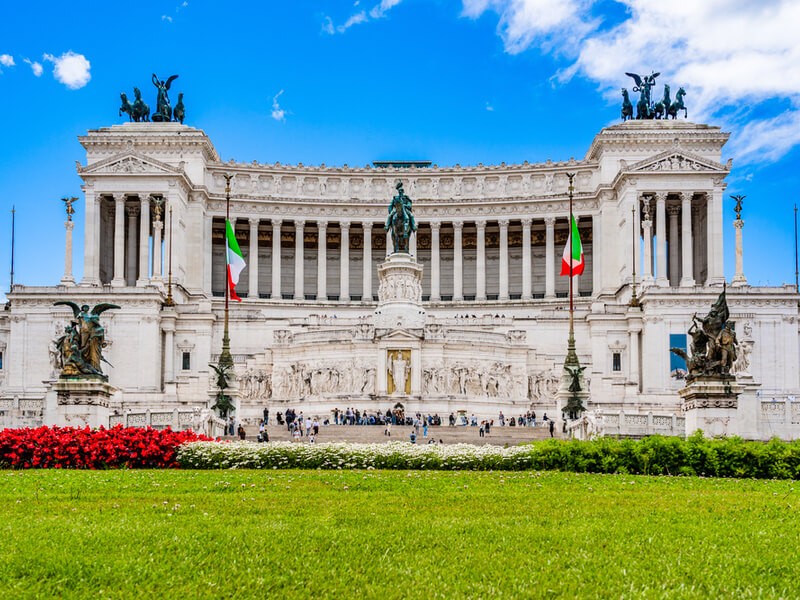 The Altare della Patria is the national monument dedicated to the King of National Unity Vittorio Emanuele II, built from 1885 and completed in 1935. Since 1921 the Monument houses the tomb of the Unknown Soldier in memory of all the missing and fallen in various battles. The monument is composed of a slightly curvilinear porch and flanked by the quadric symbol of Unity and freedom of Italy.

Not everyone knows that the equestrian statue of King Vittorio Emanuele II, placed in the center of the altar can contain about 22 people, the sword that holds measures 5 meters and the feathered hat about 2 meters.

The square where this monument stands is the famous Piazza Venezia, and it is here that important celebratory moments take place that have accentuated its role as a symbol of national identity: the Liberation Day (25 April), Republic Day (2 June) and National Unity and Armed Forces Day (November 4).