History and curiosities of the Roman Pantheon

Located in the historic center of Rome, and a few steps from the beautiful Piazza Navona, stands the second most important and majestic monument of the Roman Empire: the Roman Pantheon. A masterpiece of engineering and architecture and one of the best preserved monuments in the world.
A monument of the ancient history of Rome that neither time nor man could scratch.

History of the Pantheon

In 27 B.C. the consul Marcus Vipsanius Agrippa, son-in-law, friend and collaborator of the first Roman emperor, Augustus, built this temple, dedicating it to the seven planetary deities, and to them we owe the name of "Pantheon", which in Greek means "of all the Gods".

The present temple, however, was rebuilt by the Emperor Hadrian between 118 and 125 d. C according to the larger and magnificent structural dimensions than the previous one and with the extension in the atrium in front with a large porticoed square. Hadrian wanted to pay homage to the consul Agrippa with the large Latin inscription that you can read on the facade and dedicated to him as follows:

Agrippa, son of Lucius, consul for the third time". 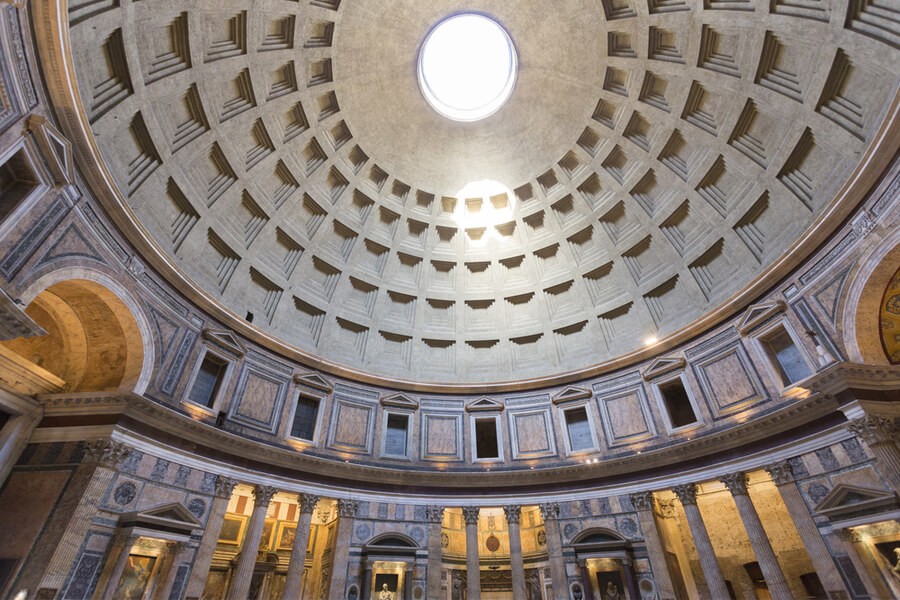 Its architecture reflects that of a traditional Greek-Roman temple, consisting of a circular hall covered by a hemispherical dome and a portico composed of the imposing columns of the Corinthian order, in all 16 and supporting the tympanum, in which the Latin inscription is extended.

Once past the huge columns and through its bronze door, immerse yourself inside the Pantheon, you can admire the wonderful dome, one of the largest in the world and second to that of Brunelleschi del Duomo di Firenze.

The fame of the Pantheon, however, is mainly due to the oculus, the hole placed above the dome that allows natural light to penetrate and illuminate the entire building.

To enjoy a beam of light extraordinarily intense is recommended to visit the Pantheon in the morning, and during the time of noon, when the sun rays enter perpendicularly leaving everyone breathless, like the power of a god who breaks into our earth.

Inside the Pantheon there are seven beautiful niches, connected to the cult of the planets: the Sun, the Moon, Venus, Saturn, Jupiter, Mercury and Mars. Inside, there are numerous frescoes and important works such as the Annunciation of Melozzo da Forlì and the tombs of famous people and artists, including Annibale Carracci and Raffaello Sanzio. Moreover, in January 1878, on the occasion of the death of the first King of Italy Vittorio Emanuele II, the Pantheon, it became home to the tombs of the Kings of Italy, hosting the remains of the King, King Umberto I and Queen Margherita of Savoy.

Some curiosities about Roman Pantheon

When you can visit the Pantheon

Visiting the Pantheon is a unique experience that cannot be missed during your visit to the Eternal City!
Take a  classical Rome tour with Green Line Tour, for a visit that encompasses culture, beauty, technique and harmony.

We also inform you that the Pantheon is open from 09:00 to 19:00 and admission is free. However, on Saturdays and holidays a reservation is require.