The Eternal City is the cradle of Christianity, the place where the first places of worship were born and later the largest and most beautiful basilicas have been created that house the works of important artists such as Raphael, Michelangelo, and Caravaggio.

In Rome, there are more than 900 churches and it ranks as the city with the most churches in the world. Some are located in the main squares and streets, while others hide in the alleys of the city.

The most beautiful and famous churches in Rome

Here is a list of the most beautiful and famous churches in Rome that are definitely worth a visit during a tour to discover Christian Rome: 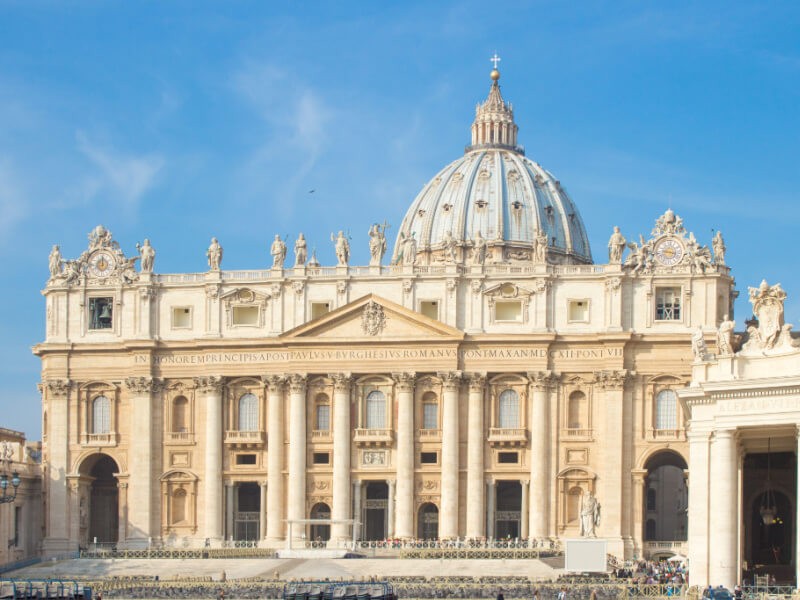 Although it is located in the Vatican that, despite being in the center of the city,  is not Italian territory, we decided to include among the most beautiful churches in Rome also the Basilica of San Pietro. Despite being part of a foreign state, in fact, Saint Peter’s Basilica is a popular destination for tourists visiting the Capital and therefore deserves to be mentioned.

The Basilica of San Pietro is the largest basilica in Rome and represents the center of Christianity. It welcomes tourists from all over the world to visit the Holy See and the liturgies celebrated by the Pope. It houses many masterpieces including several works by Bernini and Michelangelo, such as "La Pietà di Michelangelo" and the "Baldacchino di San Pietro" by Bernini. 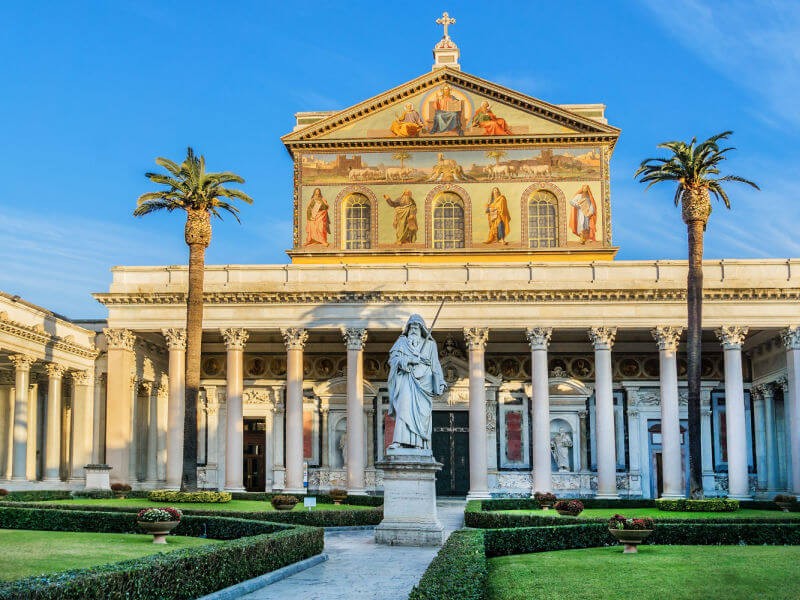 The Basilica of San Paolo fuori le mura is one of the four papal basilicas of Rome. It was built in the place where according to tradition the apostle Paul was buried. On its facade are represented the four prophets of the Old Testament: Jeremiah, Isaiah, Ezekiel, and Daniel.
At the center of the quadriportico stands the statue of Saint Paul by Giuseppe Obici, who represents the apostle with a sword in his hand. The sword has a double meaning: on the one hand it is the instrument of his martyrdom, on the other it symbolizes the Word of God of which Paul was the herald. 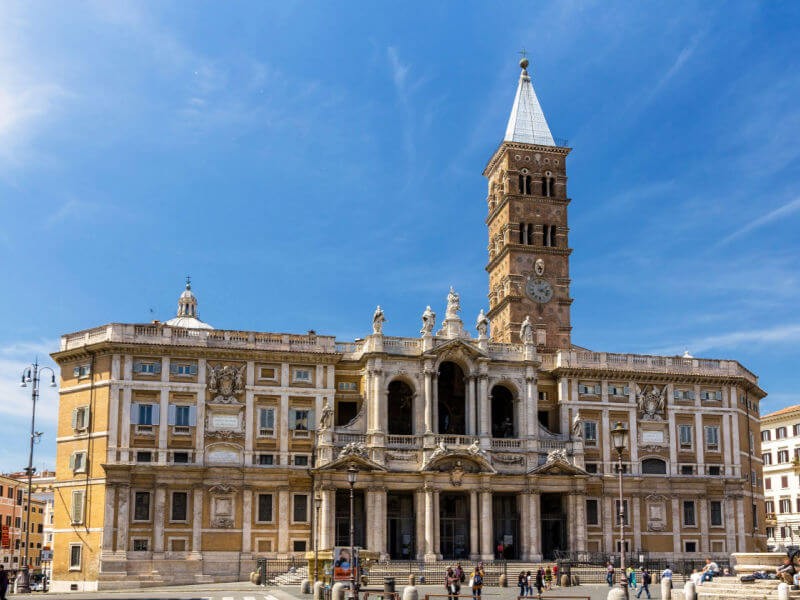 The Basilica of Santa Maria Maggiore is one of the four papal basilicas on Esquiline Hill. Inside the Basilica there are several architectural styles that summarize the most important stages of Christian art in Rome.

Basilica of San Giovanni in Laterano 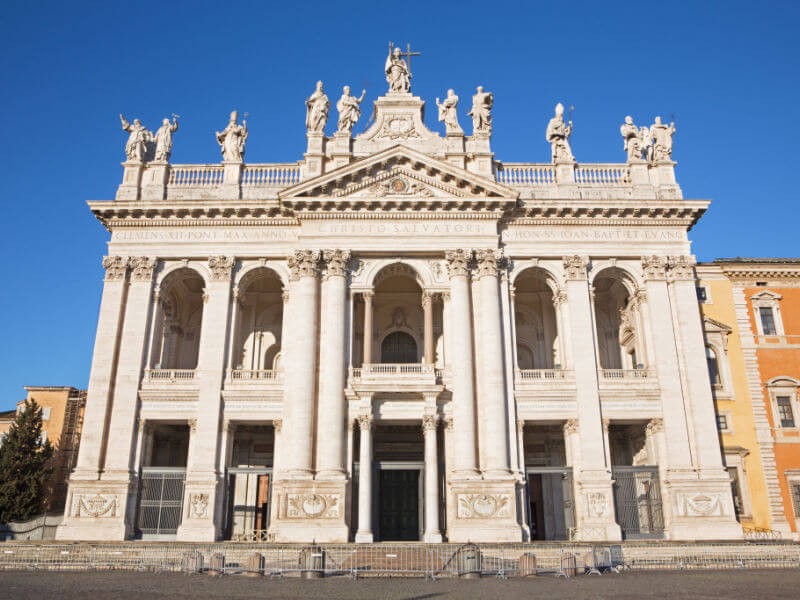 The Basilica of San Giovanni in Laterano is located near Monte Celio and was erected by Constantine around 314. It is the most important of the four major papal basils and the oldest in the West.
In front of the basilica, there is the Scala Santa, along which on Good Friday Jesus went up to be judged. 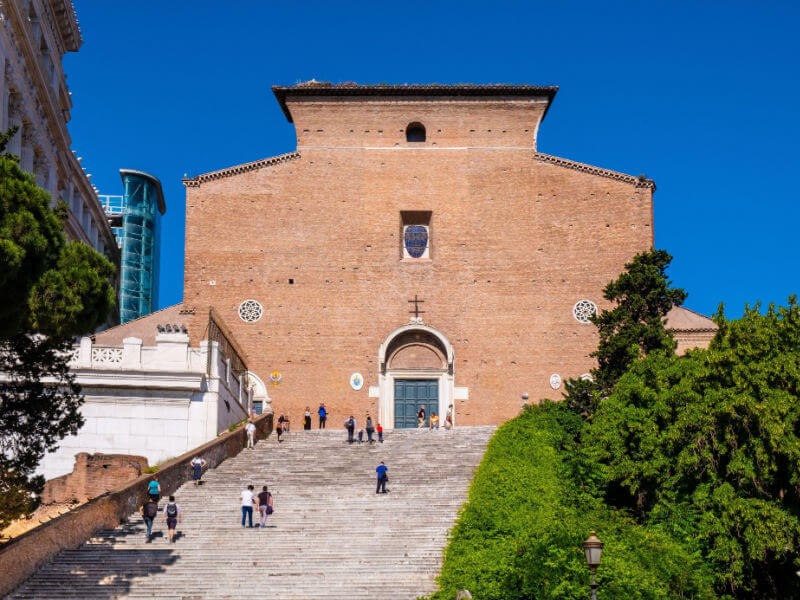 The Basilica of Santa Maria in Ara Coeli is located on the hill of the Capitol and you can visit it withour Hop-On Hop-Off Panoramic Tour. To reach the church, stands a wonderful marble staircase of 124 steps, dating back to 1348, and built to celebrate, in honor of the Virgin, the end of the plague epidemic that had spread throughout Europe. For this reason it was considered a real Scala Santa. The church, divided into three naves and cosmatesque floor, has cycles of fresco made by famous painters of the Tuscan school of 500', Pinturicchio and Benozzo Gozzoli. 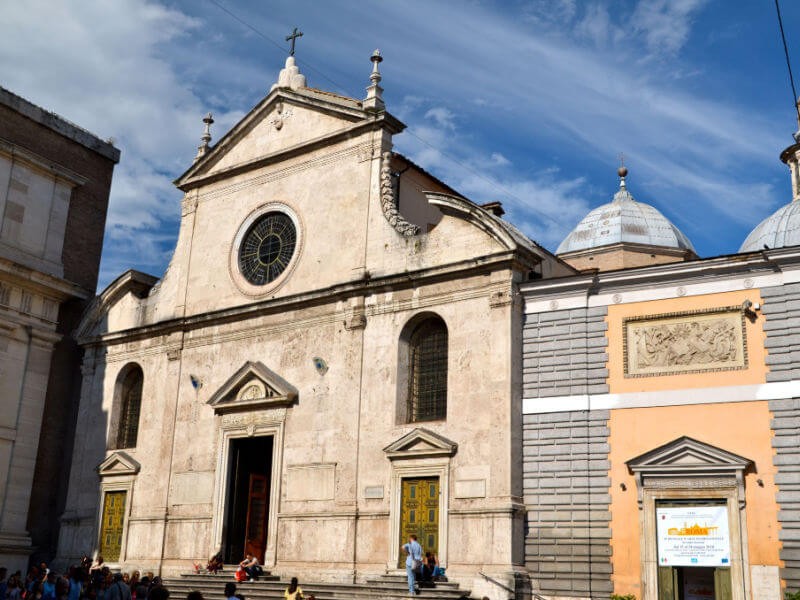 The Basilica of Santa Maria Del Popolo is a place of Catholic worship located in Piazza del Popolo. Inside the church, there are many works of art and funeral monuments. The basilica is a must for art lovers, inside it houses works of art by great artists such as Caravaggio, Raffaello, Bramante, and many others.

Basilica of Santa Sabina at the Aventine 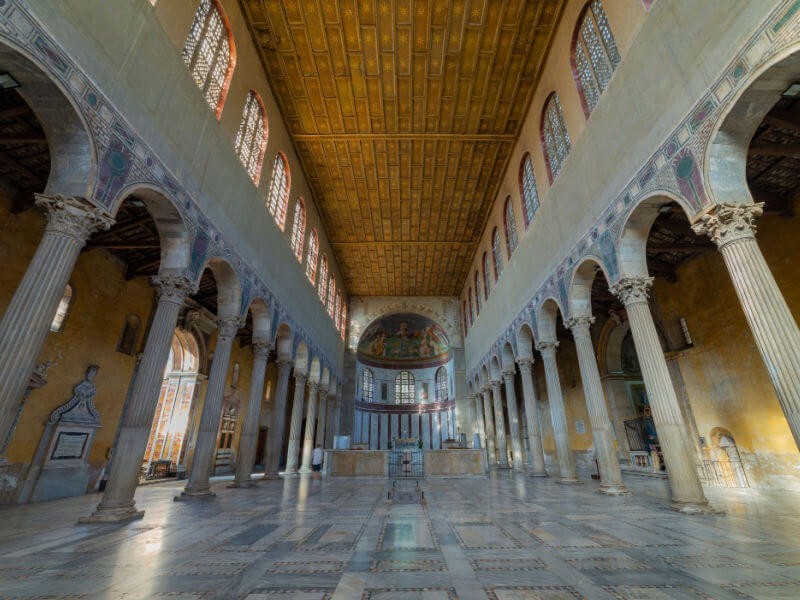 The Basilica of Santa Sabina all'Aventino is a place of Catholic worship located in the historic center of Rome (on the Aventine hill). It was built by Peter of Illyria in 425 and is one of the most beautiful and ancient early Christian churches in Rome. Its peculiarity is that it has no facade but you can access the church by an access door on its right side. 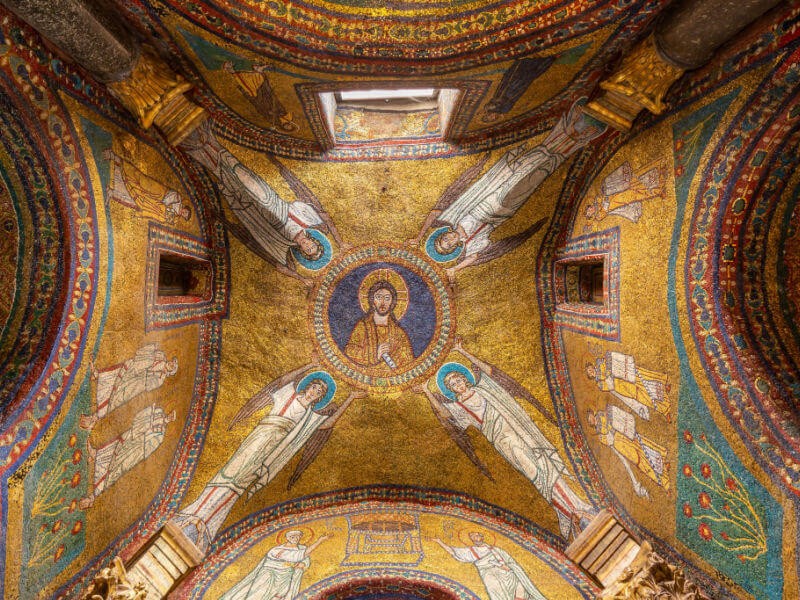 The Basilica of Santa Prassede is a Byzantine church located in the Monti district, a few steps from the Basilica of Santa Maria Maggiore. His story is linked to Prassedes and his Prudentian sister who embraced the religion of Christ and who, it is said, was killed because they hid Christians in their homes. 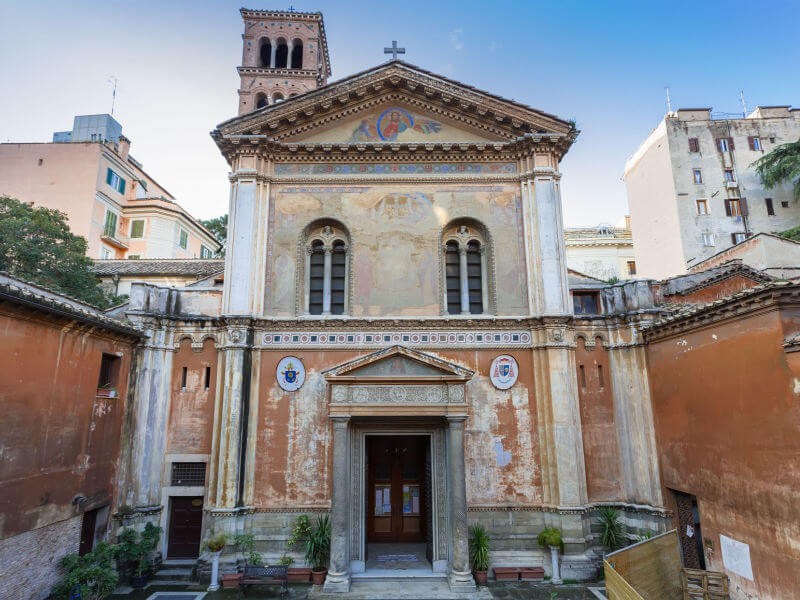 Near Santa Maria Maggiore, hidden among the palaces, there is the Basilica of Santa Pudenziana, which preserves two important testimonies of the Early Middle Ages in Rome. The most important element of the basilica is the ninth century mosaic cycle, unique for the variety of colors and the richness of symbols with which they depict the Heavenly Jerusalem and the Christ surrounded by Angels and Saints, of typical Byzantine inspiration 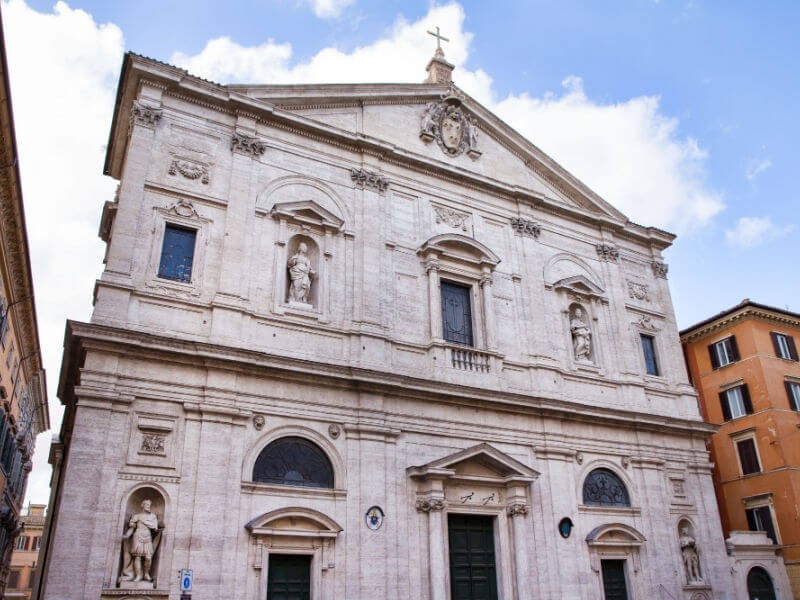 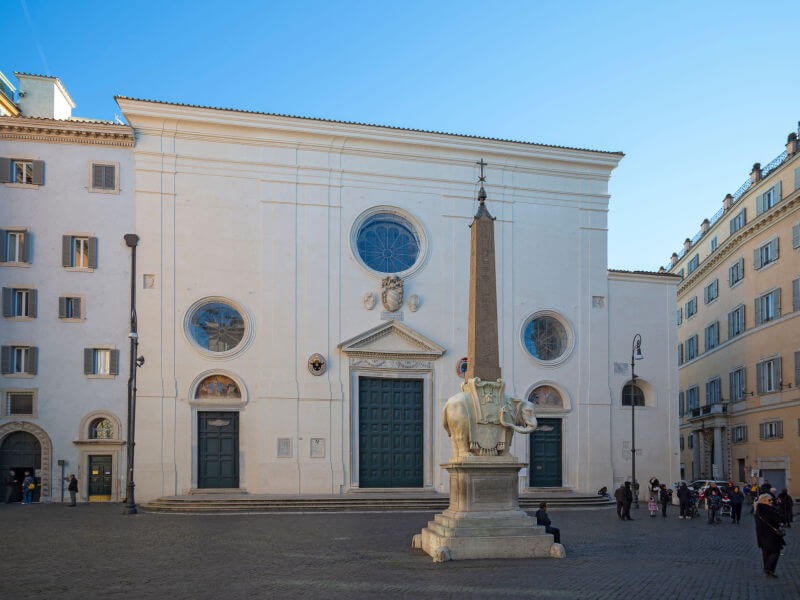 The Basilica of Santa Maria sopra Minerva, founded in the 7th century, is the only example of a Gothic church in Rome. It houses the relics of Saint Catherine of Siena and some works such as the "Annunciation with the commissioner presented by Saint Thomas Aquinas" by Filippino Lippi and the statue of Christ risen by Michelangelo Buonarroti.

Basilica of San Clemente a Laterano 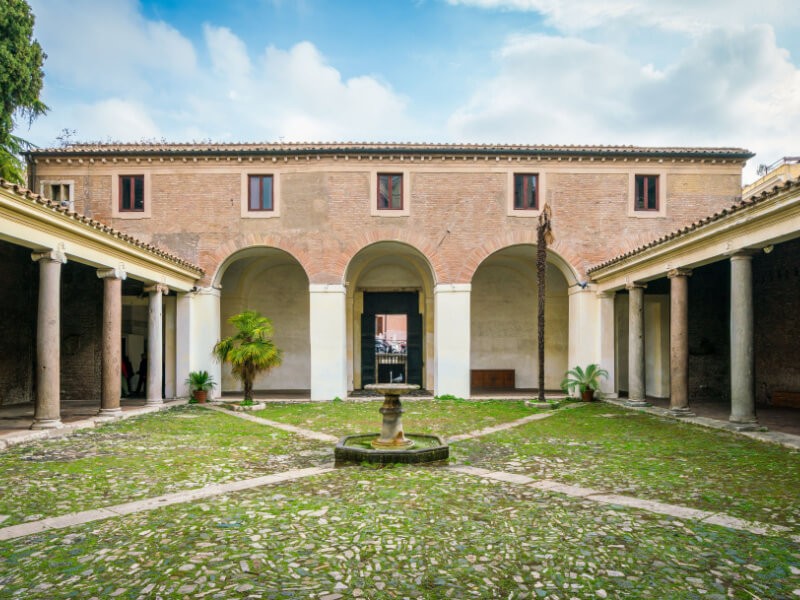 The Basilica of San Clemente in Laterano, dedicated to Bishop Clemente I, is one of the oldest in Rome erected before 385. Inside it presents important treasures such as rich decoration with mosaics of the twelfth century and an ancient church of the fourth century.

Basilica of Santa Cecilia in Trastevere 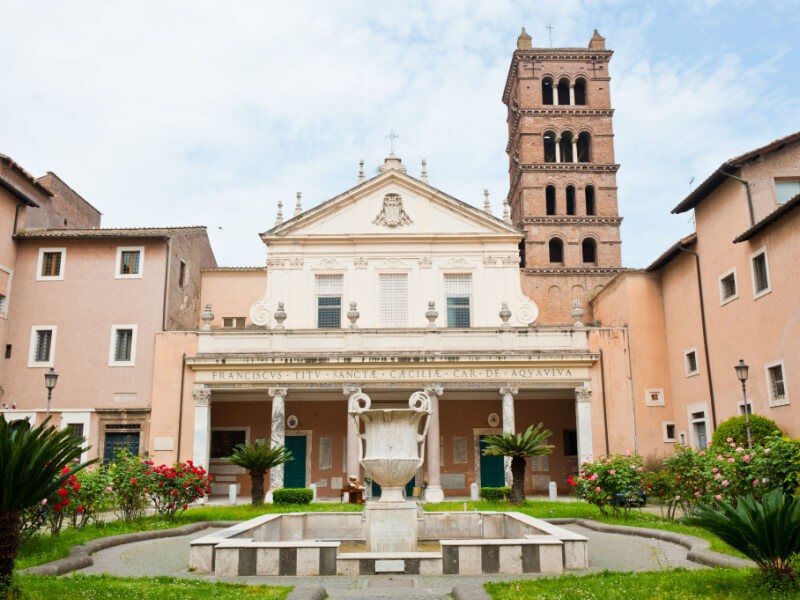 The Basilica of Santa Cecilia in Trastevere is a place of Catholic worship that is located in the Trastevere district and stands on the house of the Roman martyr Cecilia. According to the legend, it was Saint Cecilia herself who appeared in a dream to Pope Paschal I and indicated to him the precise point where his body had been buried. The Pontiff had the body moved and the church erected, to which was later added the cloister, the atrium, and the bell tower

The Basilica of Santa Maria della Pace is a place of Catholic worship just a few steps from Piazza Navona. The cloister of Bramante is a prominent element of the church, one of the most important works of the Renaissance, which today hosts numerous exhibitions and international events. 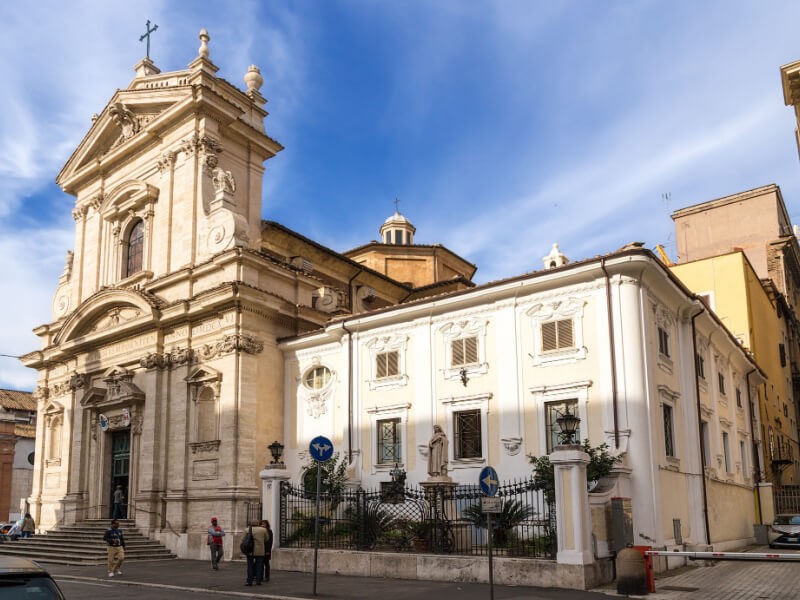 The Church of Santa Maria della Vittoria is located in Via XX Settembre, and is an important example of the Baroque period in Rome, designed by the architect Carlo Maderno. First as a chapel dedicated to Saint Paul by the Discalced Carmelites and later, after the victory of the Catholic army over the Protestants in the Battle of the White Mountain (near Prague), it was renamed Saint Mary of Victory and a Bohemian Madonna was placed on the altar.

It is said that, during the battle of the White Mountain, the chaplain of the army Father Dominic of Jesus and Mary, had on his neck an image of Mary in adoration of the Child. From the image came out rays of light that dazzled the opponents, and led them to escape.