The best things to see in Ostia antica

Around Rome, there are many beautiful villages including Ostia Antica, one of the main Roman colonies.
The ancient city of Ostia dates back to about the fourth century B.C. and was founded right on the mouth of the Tiber river (hence its name "Ostium" which means "mouth of the river").

The legend traces its foundation to the fourth king of Rome: Anco Marzio. The city, thanks to its strategic position, initially represented a Roman military base and served to defend Rome from attacks. Later it was transformed into a port and commercial center that allowed the river exchange with Rome and the sorting of commercial goods abroad.

In the third century A.D. began the decline of Ostia was put in the background by Portus (the current necropolis of Porto), in which all the commercial activities moved. In the IV century, Ostia Antica had a revival as a residential seat but was then abandoned in the early medieval period.

Today Ostia Antica enjoys an undisputed splendor and charm and is the largest archaeological site in the world (150 hectares) and the third in Italy.

If you are planning a tour to discover Ostia Antica we recommend some of the best things to see.

Ostia antica: what to see

Visiting the archaeological excavations takes a lot of time and comfortable clothing.

You can depart along with the Decumano Massimo, which connects Porta Romana to Porta Marina. The northern area of the Decumanus is a testament to the commercial life of the imperial era. This area is represented by the Forum of the Guilds and the Ancient Theatre.

The Ostian archaeological museum was created in 1865 by the archaeologist Pietro Ercole Visconti. Inside the museum, you can admire statues and other art objects collected during the excavations. Since 2000, only marble sculptures have been laid, while other objects of daily life are kept in the New Antiquarium.
Currently, 9 rooms can be visited, while for conservation reasons the rooms on the history of the excavations (Halls I and II) and that of the paintings (Room XII) remain closed.

After Herculaneum and Pompeii, the excavations of Ostia Antica represent the best example of ruins of Roman cities in the world.

Village and castle of Julius II 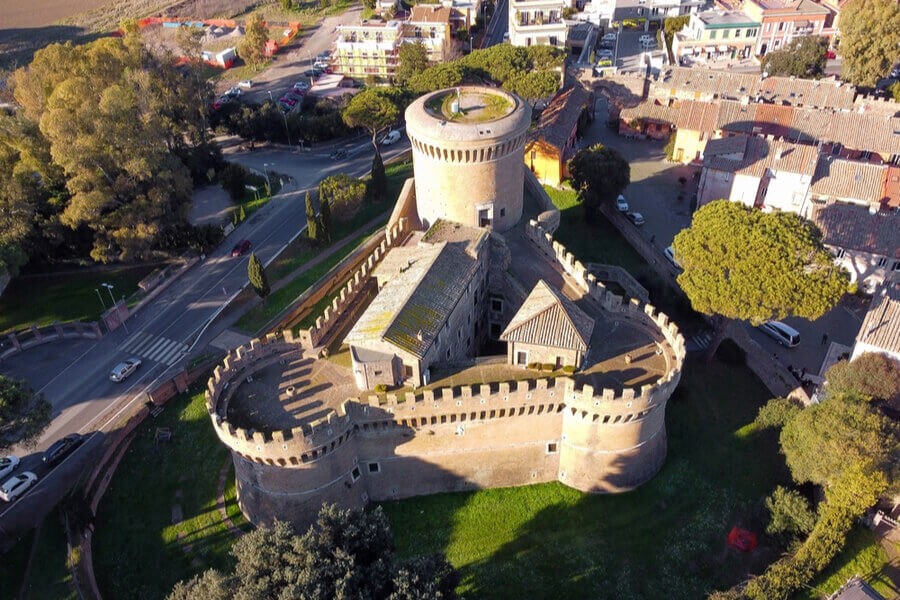 The village of Ostia Antica is of medieval origin and in late antiquity, it housed the necropolis of the Christian community. With Pope Gregory IV the village was transformed into a fortified citadel (in Latin castrum) known as "Gregoriopoli".

In the course of the 400 seen its strategic importance for the fluvial traffics and the presence of the salt pans, fortifications were built.

The Castle of Julius II was commissioned by Cardinal Giuliano della Rovere (the future Pope Julius II) who ordered its construction in 1483 by the architect Baccio Pontelli.

Inside the village of Ostia, it is also possible to visit the Cathedral of S.Aurea, completed in 1483 and strongly desired by the French cardinal d'Estouteville who once he died left the task of completing it to Pope Julius II.
Aurea (Chryse) was a Christian martyr whose body was buried in a plot of land that was later transformed into a Christian cemetery.
In the Church of Sant'Aurea was also buried Santa Monica to which was dedicated a chapel built in 1627 whose canvas (attributed to Pietro da Cortona) depicts the ecstasy of Santa Monica in Ostia.

Adjacent to the Church there are also the Episcope and the Riario Hall which host some frescoes by Baldassare Peruzzi. In 1600 the walls were whitewashed to turn the premises into a hospital. In 1977, with the restoration operations that still last, part of the frescoes were recovered 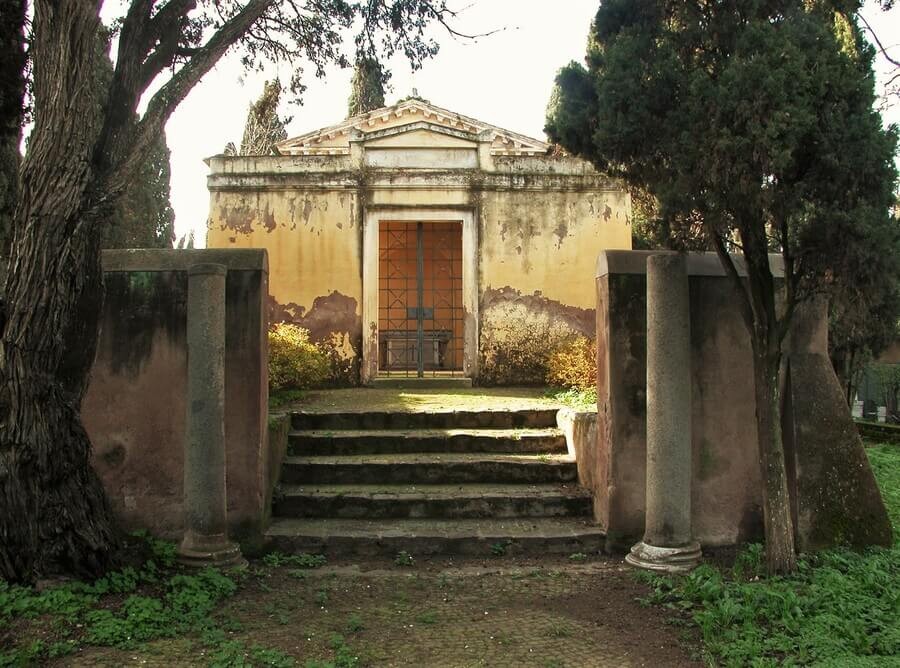 The Church of Sant'Ercolano is located near the modern cemetery of Ostia Antica. It is a medieval church dedicated to Sant'Ercolano, a Roman soldier who together with Sant'Aurea was martyred during the persecution by Emperor Claudius the Gothic.

Around the outer enclosure of the church archaeologists and scholars who have made their contributions to the discovery of Ostia Antica, including: Italo Gismondi (1887- 1974), Dante Vaglieri (1865-1913), and Raissa Gourevitch (1894-1979). 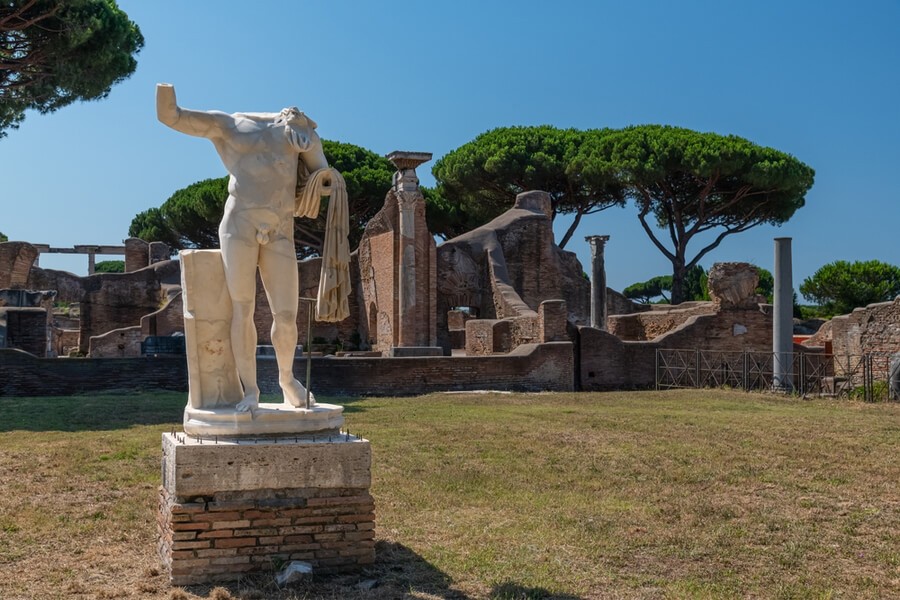 The largest square of the ancient city of Ostia is the Forum, with important buildings such as the Capitolium, the Temple of Rome and Augustus, the Curia, and the Basilica.

The baths of the Forum were elected in the second half of the second century A.D. by Marcus Gavius Gabinius. In the main entrance, it is possible to read on an epigraph the inscription "Loutron Alexiponon" which is translated as "the bath that soothes the pain". It was possible to access the spa free of charge and without a time limit to cure body and spirit.
Inside the Spa, there were also saunas and overheated pools, and a gymnasium for practicing gymnastics.

Also adjacent to the Baths we find the Forica, one of the most beautiful and well-preserved examples of public latrine that also allowed personal hygiene accurate and well superior to that of subsequent eras. 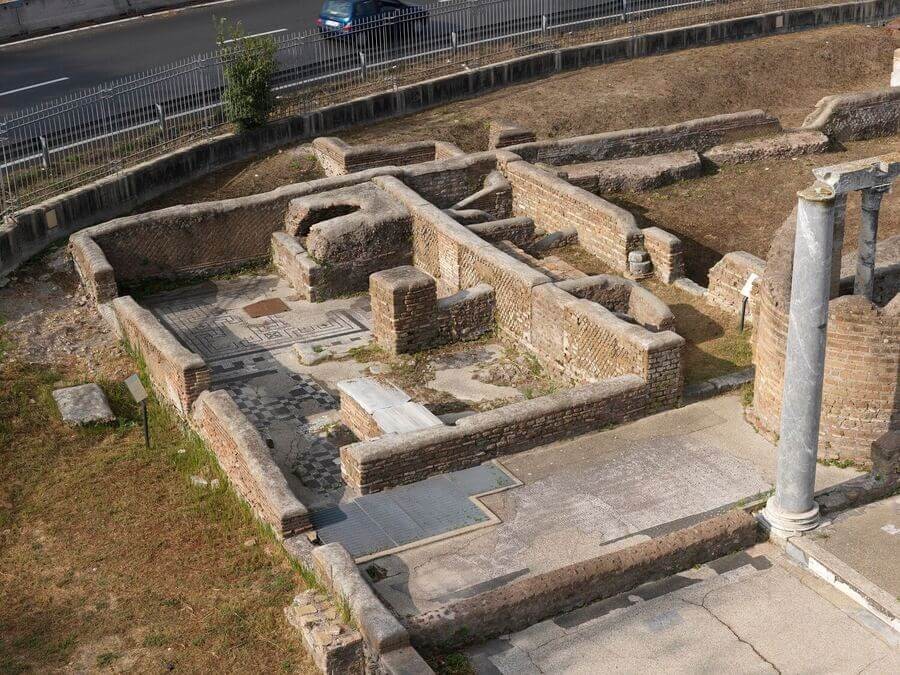 Given its welcome and the fact of being frequented by people of different origins and backgrounds, there was also a significant Jewish presence in Ostia. This justifies the presence of the synagogue (place of worship where the Jews gathered).

The Synagogue of Ostia stood along the Via Severiana, almost by the sea, and was found in 1961. It is one of the oldest archaeological evidence of Diaspora Judaism.

The rooms visible today, reflect the transformations to enlarge the complex that occurred in the fourth century A.D. A new entrance was created and in the vestibule was created a kitchen with an oven. This testifies that the synagogues also served as a hostel for beggars, pilgrims, and the poor.
Inside the hall was instead built a shrine in which the scrolls of the Law (Torah) were kept.