The history of the old town of Sutri

Italy is rich in beautiful cities and villages where important historical events have taken place, most of the times even little known. The ancient village of Sutri has very ancient origins dating back to Etruscan times.

Visit Sutri from Rome and learn more about the city of Sutri and its history.

The ancient city of Sutri

Sutri (formerly known as Sutrium) is an ancient village that rises in the province of Viterbo (VT), on an imposing tuff relief. Its history dates back to the Etruscan era, of which numerous testimonies are still preserved.

According to the most widespread legend, Sutri was founded by the Pelasgians, an ancient people of Eastern navigators, while other legends attribute its foundation to Saturn. The coat of arms of the city is represented by the god Saturn on horseback, holding three ears of grabno representing fertility and abundance.

Sutri is known as the "Door of Etruria", the gateway to the Etruscan Empire. During the Etruscan domination, it experienced a remarkable development both as an agricultural and commercial centre.

The donation of Sutri

In 383 B.C. it was conquered by the Romans, taking on a military and strategic importance. With the fall of the Roman Empire, Sutri was disputed between the Lombards and the Byzantines.

In 728, after a series of struggles, the Lombard ruler Liutprand donated to Pope Gregory II some castles of the Roman Duchy including Sutri.
From that moment, known as the donation of Sutri, the city became an important bishopric.

What to see in the Ancient city of Sutri 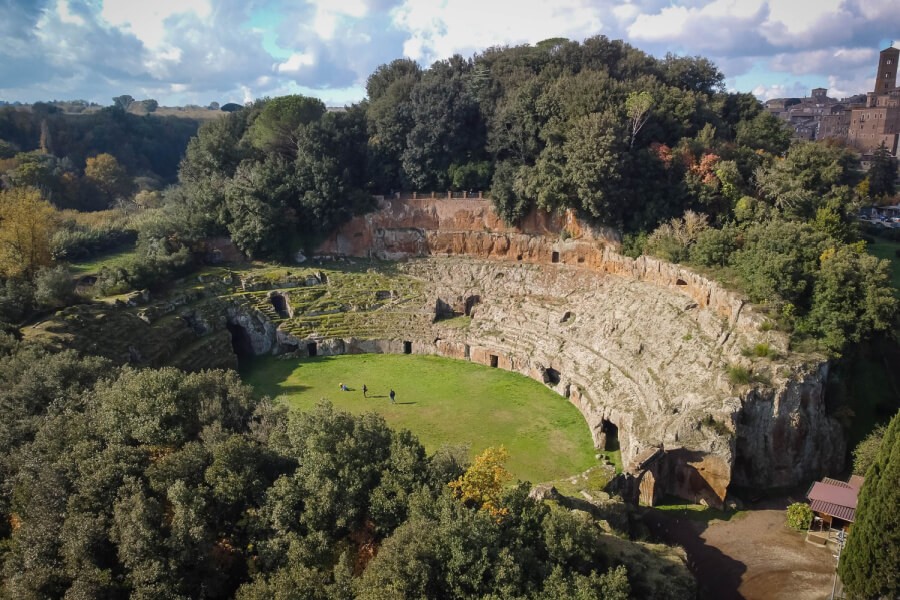 In 2003 the Municipality of Sutri received from the Touring Club Italiano (TCI) and from the Lazio Region the Orange Flag as a certificate of tourist and environmental quality. One curiosity that not everyone knows is that the mayor of Sutri is Vittorio Sgarbi.

There are many wonders to discover in the ancient city of Sutri, here are the most famous:

Museum of the Doebbing
Palace Doebbing is an ancient bishop’s palace that houses great masterpieces of Italian art. Its name derives from Father Joseph Bernard Doebbing, bishop of Nepi and Sutri since 1900.

Villa Savorelli
Villa Savorelli is a three-storey building dating back to the 18th century and surrounded by a large green space. The construction of the Villa was attended by well-known artists of the time, including Giorgio De Chirico who edited the color of the facade of the villa.
The Villa is currently home to the Regional Park and the council hall of the City and its interiors are used for conferences and seminars.

Church of Madonna del Parto (Mitreo)
The Etruscans adored the god Mithras, for this reason they decided to create a sacred place where they could venerate him: the Mithraeum, also known as the Church of the Madonna del Parto.

Inside the Mithraeum you can see mosaics and paintings from the early Christian period, including the wonderful fresco depicting the Nativity.

Roman Amphitheatre of Sutri
One of the most striking monuments of antiquity is the Roman amphitheater of Sutri directly dug into the tuff.

The elliptical amphitheatre could accommodate up to 5000 spectators and was suitable for horse races, fights between animals and gladiators and all other Etruscan and Roman practices.

Sutri Cathedral
The Co-Cathedral of Santa Maria Assunta is the city’s main place of worship. It was built in the Roman period on the remains of previous sacred buildings. The building was consecrated by Pope Innocent III in 1207.

Also worth a visit are the Church of the Madonna del Tempio, owned by the Order of the Templars and the cave of Orlando, where according to legend Orlando, paladin of France and the House of Dante were born, where it is said that Dante Alighieri stayed on his trip to Rome for the Jubilee of 1300.

What to see around Sutri

Among the things to see in Tuscia Viterbese in the surroundings of Sutri, we could recommend natural attractions such as Lake Bracciano and its village and the Monster Park of Bomarzo, important historical city-as Viterbo, Orvieto and Caprarola with its Palazzo Farnese, and with us an inevitable one-day visit to Civita di Bagnoregio, the disappearing city. Visit our tours outside the city and discover the beauty of ancient villages just a little more than now from Rome.