History and curiosities about Piazza Navona

One of the most famous monumental squares of Rome is Piazza Navona, certainly one of the most famous of the city, and tourist attraction center for its architectural beauties, for its sculptural fountains and for the entertainment that for children and adults is always ready to give.

However, not everyone knows its history and the curiosities that are linked to history to the tradition of Piazza Navona. Let’s see them together.

The history of Piazza Navona

At the time of ancient Rome, Piazza Navona was the Stadium of Domitian built by the Emperor himself in 85 AD.

The square was built on the perimeter of the ancient stadium, for this has an elongated rectangular shape. Currently the level of the square is raised about 6 meters from the previous one.

Its name was originally "in Agone" (from the Latin "in agonis" which means "games"), because the stadium was intended for athletes. Here, in fact, there were all kinds of challenges such as boxing, poetry, athletics and then fights between gladiators. But there were places for the most unbridled and out of line Roman fun and for this, the square was also surrounded by taverns taverns and brothels.

Over the centuries it has been the scene of many popular festivals, races and rides. After the fall of the Roman Empire the square came back to life as one of the main open-air markets of the city.

What to see in Piazza Navona?

Piazza Navona is the symbol of Baroque Rome. You can visit Piazza Navona with our panoramic tour by bus, getting off at stop number 6 of "Vatican City". Or you can book a tour of Rome by night and see this and other important monuments of Rome illuminated and surrounded by a romantic and magical atmosphere. The square has three fountains and an obelisk and a magnificent church located right in front of the Bernini fountain: the church of Sant'Agnese in Agone.

Piazza Navona is bordered by the extraordinary Baroque buildings: the Church of Sant'Agnese in Agone with its obelisk, Palazzo Braschi and Palazzo Panghilj. But what is most striking in the square is certainly the complex of three fountains, masterpieces of architecture and sculpture, famous all over the world with the title of "The Fountains of Piazza Navona".

The Church of Sant'Agnese in Agone

The church of Sant'Agnese in Agone is a Catholic church dedicated to Saint Agnes. The project was designed by Girolamo Rainaldi in 1652 commissioned by Innocent X Pamphili. The works continued under the direction of Francesco Borromini and were finished in 1672 by the architect’s son, Carlo Rinaldi. According to legend, the church is located in the place where the martyrdom of the Saint took place.

A visit to the museum of Palazzo Braschi

Located between Piazza Navona and Corso Vittorio Emanuele II, in the heart of Renaissance Rome, you can not miss a visit to Palazzo Braschi, Museum of Rome, which brings together a wide variety of works of art related to the history of the city of the Medieval period, and the first half of the 20th century.

The museum’s collection contains many objects, furniture, engravings and works ranging from cultural, topographical, architectural, social and artistic history of the capital.
The collection of paintings is the most important and of great documentary value, produced between the sixteenth and eighteenth centuries, for religious ceremonies and civil events.
The sculptural section is instead characterized by monumental works, busts, sketches and clay models.

Another large collection consists of drawings and watercolors, prints, engravings and books that testify to the history and evolution of the topography of the city.

→ If you are in Rome during the holidays and you are walking through the streets of the historic center of Piazza Navona, until February 5, you can visit the exhibition of over 160 works, including mosaics, frescoes and works that tell the medieval Rome from Roman places and collections, to bring tourists and citizens closer to the riches of the city.

The fountains of Piazza Navona

Piazza Navona is equipped with three fountains and an obelisk that rises to 16 meters.

Fontana del Moro, is the oldest of the three fountains and was sculpted in 1654 by master Ludovico Rossi of Fiesole. The work owes its name to the statue of the Ethiopian fighting with a dolphin.

Fountain of Neptune, commissioned by Pope Gregory XIII and designed by Giacomo della Porta in 1574. The work was not completed and remained without sculptures for about 300 years. Antonio dell'Bitta created the sculpture of the water god Neptune with his trident fighting with an octopus. The other sculptures, representing sea horses, mermaids and playing with dolphins, were made by Gregorio Zappalà.

Fontana dei Quattro Fiumi, the largest of the three fountains in Piazza Navona. Designed by Gian Lorenzo Bernini between 1648 and 1651 A.D. The fountain is designed as a travertine cliff supporting the large obelisk. On the corners of the cliff there are marble statues of the four rivers of the continents then known: the Danube for Europe, the Ganges for Asia, the Nile for Africa and the Rio della Plata for America.

The Christmas markets in Piazza Navona 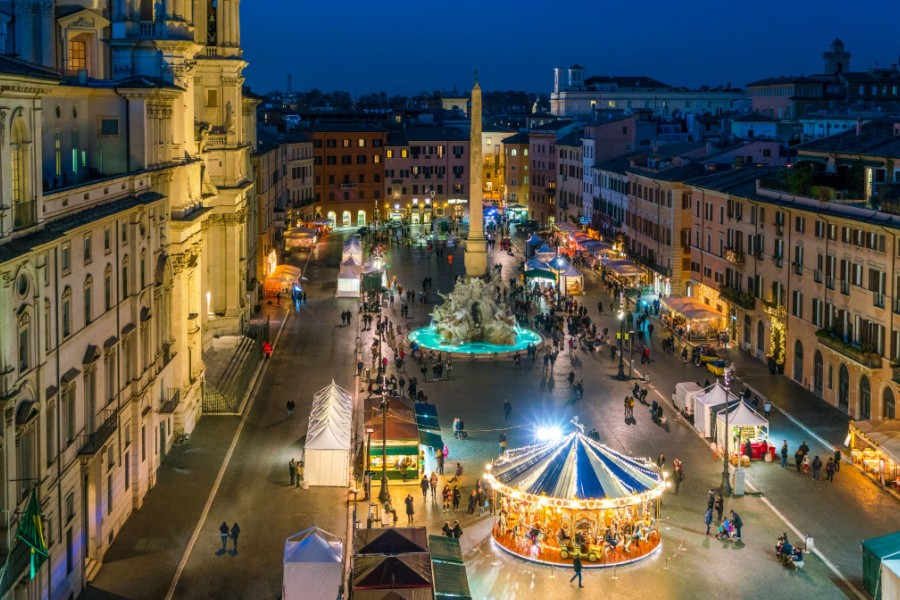 Today Piazza Navona is the center of Roman nightlife, with many bars, street artists and home to one of the most famous events of the Christmas holidays: the Christmas markets.

In the square, on December 6, is also celebrated the Feast of the Epiphany, with many programs and activities for young and old.

Around Piazza Navona there are many facts, curiosities and legends:

Rome is one of the main cities on the big screen. Piazza Navona also contributed to some of the most beautiful scenes in the history of cinema, including: