All the beauty of Coppedè Quarter in Rome

Rome is known for its main attractions and the most famous monuments, but not everyone knows that just a few steps outside the center, a short but charming walk in the historic Coppodè District awaits you.

The district is located between Via Salaria and Via Nomentana, and is a fairy-tale oasis within the city. It consists of a residential complex of 26 buildings and 17 cottages, built through a mix of different architectural styles: Art Nouveau, Art Deco, Baroque and Gothic, combined with medieval and Greek features

Do you want to see this wonder? Discover Rome with the help of our guides.

History of the birth of the Coppedè District

At the beginning of the 20th century, Rome was booming, and from the capital of the papacy it had become the capital of Italy in 1871 and was trying to align itself with the urban development of the great European capitals.

The project was conceived and built between 1913 and 1926 by the architect Gino Coppedè from whom it takes its name, and in whose neighborhood he himself lived during his life.

A walk inside the Coppedè district of Rome 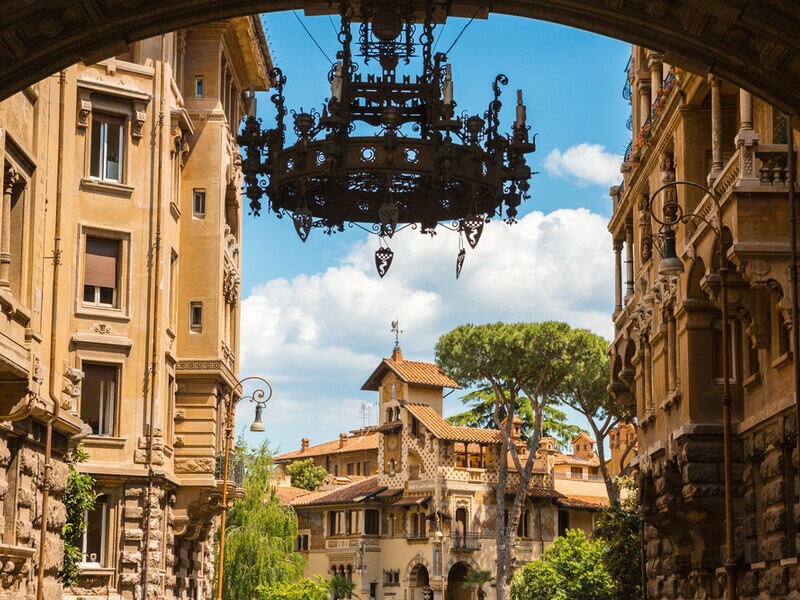 The entrance is represented by a large monumental arch that connects the two palaces of the ambassadors. Before crossing the arch, if you look up, you can admire the center once richly decorated and embellished in the center by a large wrought iron chandelier.

From here you can reach Piazza Mincio and the center of the district from which you can admire the famous Fontana delle Rane. The fountain is populated by 12 frogs and a bee on the edge of the pool, made in honor of Bernini’s Fountain of the Bees.
His fame is due to a curious anecdote, in 1965 after holding a concert at the Piper, the Beatles threw clothes right in this fountain.

In Piazza Mincio there is the Palazzina del Ragno, which follows the Assyrian Babylonian style and is characterized by the presence on the facade of a decoration depicting a large spider.

Another building of extraordinary beauty is Villino delle Fate, the union of three cottages that, through symbols and characters,  pay homage to the lodges of Florence, Rome, and Venice. Among the figures represented you can admire the portraits of Petrarch and Dante, the winged lion of San Marco, and the Capitoline wolf of Romulus and Remus.

Curiosity about the Coppedè Quarter

Finally, if you are a fan of cinema, this stage is almost mandatory for you:
The evocative atmosphere of this neighborhood has inspired the films of many directors such as Nanny Loy, Richard D In Piazza Mincio 4, there is the Palazzina del Ragno, which follows the Assyrian Babylonian style and is characterized by the presence on the facade of a decoration depicting a large spideronner, and in particular Dario Argento.
The famous horror director Dario Argento used it as a location for two of his two most famous short films: "Inferno" and "The bird with crystal feathers".

Many history buffs have defined the Coppedè district as a district with northern European architectural origins. Entering under the arch in fact you walk from west to east as the Gothic cathedrals and all the sacred buildings of antiquity, so that the faithful entering walk towards the birth of the sun.

On the entrance arch there is a Gothic-style chandelier and to the right of the entrance there is a statue of the Virgin Mary whose presence in the Gothic cathedrals as well as in the Cathedral of Notre Dame de Parì testifies.

Strange coincidences also seem to coincide between the Via Doria, the only access to the Coppedè district, which measures 37 meters, such as the Gothic nave of Chartes, and from Piazza Mincio to the apse, or from the tower of the Villino delle Fate, there are 37 meters, and always exactly as in Chartes. In one of the cottages of the Coppodè, there is a mosaic depicting a rooster with three dice, with numbers one, three and five. Studying the symbolism of the rooster, this is a sacred animal linked to the worship of the Sun, the ancient feast of the rooster is our August, the day of the Ascension.

A set of unique and particular features, which have made the Coppedè District one of the most unusual and original districts of Rome.