The best Ghetto food to try

The street food of the Ghetto of Rome is to be tried at least once during a trip to Rome. The Jewish Ghetto is located on the left bank of the Tiber, between Largo Argentina, one of the oldest sanctuaries in Rome and the Tiber Island. You can visit it with our Hop On Hop Off, reaching the stop 5 of Piazza Venezia, where you can first visit the Teatro Marcello and the Capitol.

The Jewish Quarter has retained its character to this day, despite its central location in the heart of Rome. Here, you can find archaeological, cultural and religious evidence and try the true kosher cuisine in the city.
Here are some tips to live this experience to the fullest.

Casherut and the consumption of kosher food

The Casherut (or Kasherut) indicates the suitability of a food to be consumed by the Jewish population according to the norms established in the Torah, interpreted by exegesis in the Talmud and codified in the Shulchan Arukh.

The Torah and the Pentateuch classify the animals allowed by Casherut in groups and also explain how they should be slaughtered. The slaughter, in Hebrew shecità, must be carried out so that all blood is eliminated. Among the quadrupeds it is allowed to eat those that have the split hoof and the divided nail, and that are ruminants.

Getting the Kosher brand requires commitment and strict control. Given the high quality standard, Kosher products are also consumed by people of other religions who see in these products safety and health.

Food from the Ghetto of Rome: what do you eat in kosher cuisine? 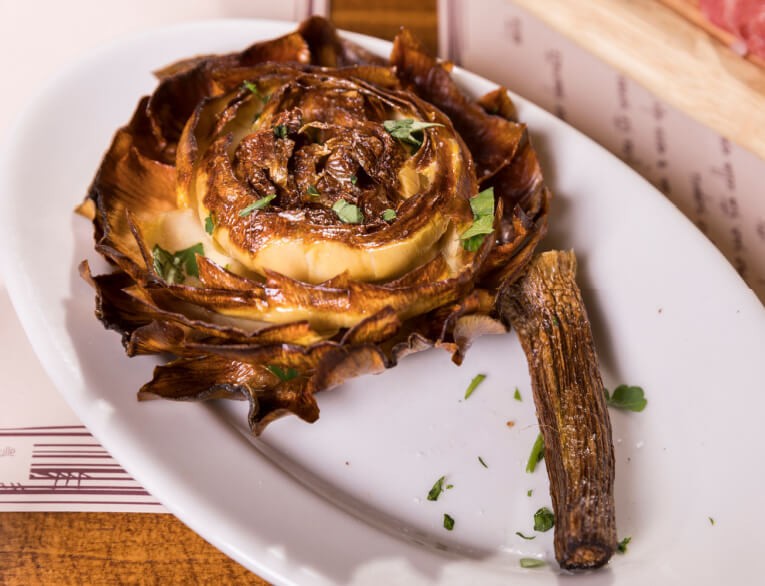 Here are some unmissable foods of the Ghetto of Rome:

Carciofo alla giudia, one of the most famous dishes of the Judeo-Roman tradition. The artichokes (artichokes cimaroli or mammola) are fried whole and served to be eaten without discarding anything.

Concia di zucchine (zucchini tunning), a simple but incredibly good dish. For the traditional tanning, the fried zucchini is used and served cold, after 24 hours of rest and marinating.

Tortino di indivia e alici (Endive and anchovy pie), proposed both as an appetizer and as a fish main course. The pie is composed of simple and poor ingredients: the escarole or curly endive and fresh anchovies. Once assembled and seasoned with a chopped garlic and parsley, the cake is baked in the oven and served lukewarm.

Filetti di baccalà alla romana (Fillets of cod alla romana), a street food very popular in the ghetto of Rome. It is a fillet of cod battered and fried, which is often taken away to be consumed in the streets of Rome.

Origins of the Jewish Ghetto of Rome

The Jewish Ghetto of Rome is among the oldest ghettos in the world, built by Pope Paul IV in 1555 choosing one of the most dilapidated and unhealthy neighborhoods of the city, and where the Jews are separated from the rest of the population

Here the Jews were subjected to a whole series of rules and prohibitions including:

Only in 1870, with the breach of Porta Pia, the Italian Army conquered Rome and the city with all its territory was incorporated into the Kingdom of Italy. In the 19th century, Jews achieved, as in the rest of Europe, full emancipation and equal civil rights. The Jews therefore decided to erect a monumental synagogue, called, the Greater Temple where inside the Jewish Museum of Rome can be visited.

The inhabitants of the Jewish ghetto were subjected to two brutal historical events, the deportation on 16 October 1943 when the Nazis carried out a raid and captured over 1,000 Jews from their homes. The prisoners were loaded onto the wagons of a convoy of cattle wagons to Auschwitz. Of the deportees only 16 survived the extermination.
And the 9 October 1982 attack by a Palestinian commando who fired and threw hand grenades at the crowd of the faithful who were leaving the synagogue. Little Stefano Gaj Tachè, just 2 years old, died and thirty-seven people were seriously injured.