History of the Basilica of St. John Lateran

The Basilica is located on the Hill of Celio and is the oldest, as well as the first to which it has been awarded the title of basilica and is therefore called "archbasilica". More precisely, he has the honorary title of Omnium Urbis et Orbis Ecclesiarum Mater et Caput, which means "Mother and Head of all the Churches of the City and of the World".

This Basilica, for its beauty and its historical importance, is undoubtedly an essential destination for tourists and pilgrims from all over the world.

When was the Basilica of St. John Lateran built?

The Basilica of San Giovanni in Laterano was built in the fourth century in the Horti Laterani, an ancient land possession of the Lateran family, confiscated during the empire of Nero.
In the area where the basilica was built, Marcus Aurelius built a residential building in the year 161 and Emperor Septimius Severus used part of the confiscated land for the construction of a large military complex called Castra nova equitum singularium, or New Barracks of the Chosen Guards.
The land and the palace reached the emperor Constantine when he married in 307 Fausta, daughter of the ex-emperor Maximian. According to tradition, it was Constantine who, following the victory of the Battle of Ponte Milvio (312 AD), had the Basilica built near the palace as a sign of recognition towards Christ.

The Basilica was consecrated in 324 by Pope Sylvester I who dedicated it to the Most Holy Christ the Saviour. In the 9th century, Pope Sergius III also dedicated it to Saint John the Baptist, while in the 12th century, Pope Lucius II also added Saint John the Evangelist. In fact the real name of the church is Basilica of the Most Holy Saviour and of Saints John the Evangelist and John the Baptist.

The interior of the Basilica of St. John Lateran 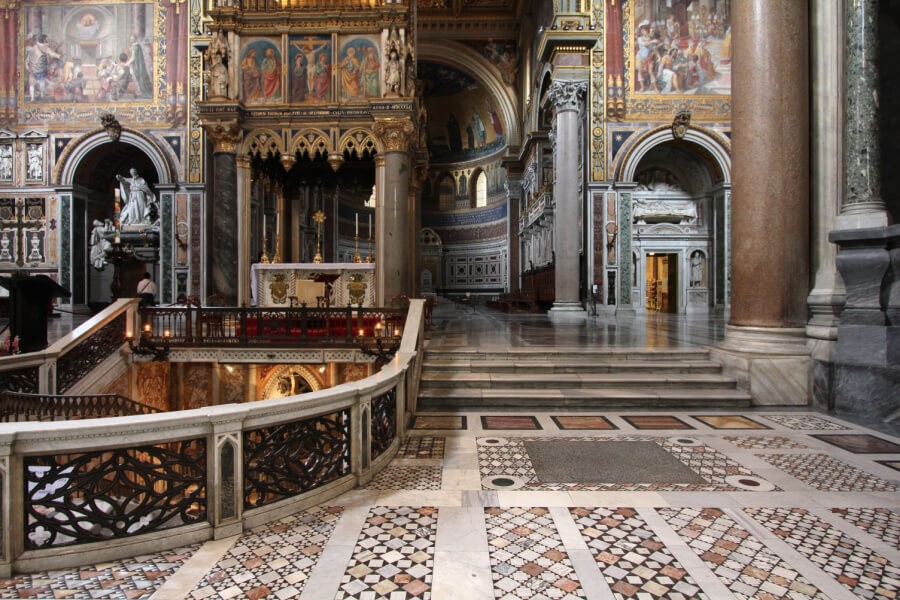 Originally the Basilica was known as the Golden Basilica and received continuous donations from emperors, popes and other benefactors.

The Basilica over the centuries was repeatedly damaged by vandalic attacks, looting and earthquakes, and restored.
Its total reorganization was made by Francesco Borromini who created here one of his highest masterpieces, reconstructing the entire nave and the side.

Among the most famous works of the Basilica of San Giovanni in Laterano we have the fresco by Giotto depicting Pope Boniface VIII in the act of holding the first Jubilee of 1300, the coffered ceiling of the central nave designed by Pirro Ligorio and decorated by Daniele da Volterra and the cosmatesque floor.

The Cloister of the Lateran
The Cloister was built in the first half of the thirteenth century. by the famous Roman marble Pietro Vasselletto.
Measuring 36 meters per side and is, in fact, the largest cloister in the capital.
Inside the Cloister there are numerous sculptures and ornaments including some works by Arnolfo di Cambio and a copy of the bull of Gregory XI on the primacy of the Archbasilica.

In the middle of the inner garden courtyard is the 9th century Samaritan Well.

Holy and Sancta Sanctorum Staircase
The Pontifical Shrine of the Holy Staircase is among the most illustrious in the Catholic world. It is located at the Basilica of San Giovanni in Laterano and houses the chapel of the Popes called Sancta Sanctorum, where the image of SS. Salvatore (called Acheropìta, or not painted by hand of man).

The Sancta Sanctorum is one of the best examples of Gothic art in Rome.
The chapel housed many and most venerated relics of saints defined "the holy things among the saints", the sancta sanctorum precisely. For this reason, the chapel, originally dedicated to San Lorenzo, in the ninth century was called Sancta Sanctorum.
Under the papal altar, there are two bronze doors that cover the cypress ark made by Leo III and containing the treasure and the relics of the Sancta Sanctorum. These are showcases, crosses, pyxes, fabrics, embroidery, parchments, miniatures, enamels, of incalculable value.

You can reach the "Chapel of San Lorenzo" or "Sancta Sanctorum" through the Scala Santa, built by Pope Nicholas III in 1278. The heart of Christianity, the Scala Santa , is composed of 28 steps of white marble, those that, according to tradition, were walked by Christ to go to Pontius Pilate on the day of his death sentence. And for this call Scala Santa.
The steps, according to tradition, were brought to Rome in 326 from Jerusalem at the behest of Saint Helena, mother of the Emperor Constantine.
The steps lead to the chapel and they must have gone up on their knees out of veneration for the Passion of Jesus.

At the center of the square is the oldest and tallest obelisk in the city (31 meters), made of red granite, which was located in the temple of Ammon in Thebes, near Luxor.
At the foot of the obelisk, the Fontana dell'Acqua Felice, built in 1588 by Domenico Fontana.

San Giovanni in Laterano, some curiosities

If you are curious we will reveal some details you may not know about the Basilica of San Giovanni in Laterano: